Vanessa (seated, centre), flanked by Cendida on her left and Quyyns, smiles for the camera during a photo-call with other finalists after crowning. Also seen are the other three top-six contestants (front, from left) Monisha, Celestia and Chong.

Vanessa Gilbert, 22, of Iban-Bidayuh parentage, walked away with scholarship worth RM8,900 from IBS College Miri, in addition to other prizes including a  three-day, two-night stay in Bario, as well as skincare and beauty products.

Additionally, she also clinched two out of 15 subsidiary titles – ‘Miss Best Makeup Look’ and ‘Miss Black Pearl of the Night’.

Vanessa was among the 16 finalists of the pageant, organised by Brenda and Brandan’s Art Paradise with support from Miri City Council (MCC).

With the win, Vanessa will represent this division at Miss Grand Sarawak 2018, to take place in Sibu from Feb 28 to April 1.

At third place was 23-year-old Quyyns Evysia, who is of Bidayuh-Melanau-Rungus-Indonesia lineage. The young woman, who had acquired certificate to become a flight attendant, received RM5,340 worth of scholarship from IBS College Miri.

Cendida and Quyyns also each won two subsidiary titles – the former was named ‘Miss Talent’ and ‘Miss D’Lux of the Night’, while the latter was both ‘Miss Congeniality’ and ‘Miss Kumang of the Night’. Additionally, Cendida will take part in Miss Grand Marudi 2018, slated for next month.

Three other top-six contestants also received scholarships, each worth RM1,780, as well as subsidiary titles – they were Celestia Unyang, 18, who was ‘Miss Cultural’, Monisha Winnie, 21 (Miss Ethnic Beads), and Sweethy Chong, 22 (Miss Social Media and Miss Jayau 2000 of the Night).

According to MGM founder and its assistant divisional director Brenda Yeo, the organiser is set to hold Miss Grand Miri 2019 following the overwhelming response from the participants and sponsors, as well as solid support from the MCC.

“Women who wish to take part must prepare themselves well, in that they would become the ambassadors of Miri at the advancing levels of the competition,” Brenda said. 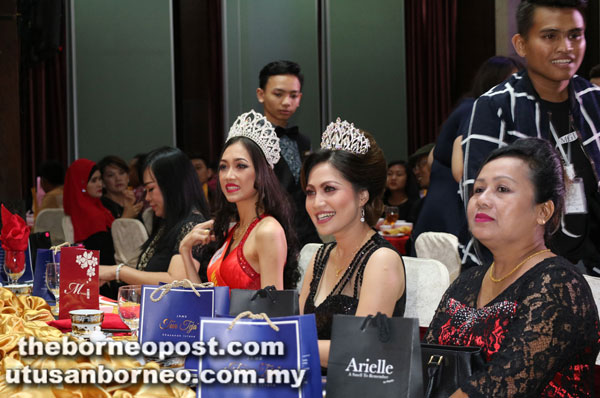 (From right) Gina, Nunda, Chu and Hisdora assess each contestant during the finale.