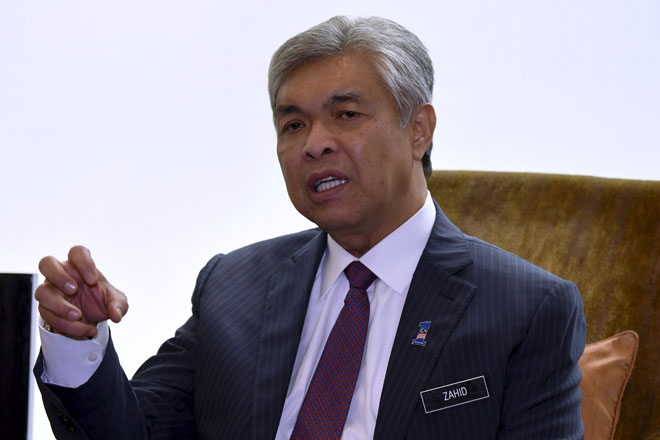 In achieving the vision, he expressed hope that the related ministries would be able to finance the initiatives.

Ahmad Zahid, who is also Home Minister noted that Malaysia was now moving from being an end-user to an active industry player in designing and manufacturing latest security products.

Thus, with the financing,  the country would soon be able to produce its own internationally well-known security firms, he said.

“I hope the Defence Minister and his secretary-general, together with my secretary-general…and the  Ministry of Finance to fully finance the activity of R&D related to defence and security,,” he said in his speech during the soft launch of the 16th Defence Services Asia Exhibition and Conference(DSA) and the inaugural International Exhibition on National Security for Asia 2018 (NATSEC), here today.

On NATSEC which will be held alongside DSA on April 16 to 19 here,  Ahmad Zahid said the exhibition would complement DSA by focusing on sectors and areas under national security, including public order, border control and counter-terrorism.

“This makes it a one-of-a-kind event in the region, and creates a favourable networking platform for synergistic business and government collaborations,” he said.

Both events, which he described as the biggest security and defence exhibition of the year, was expected to attract over 1,500 exhibitors, 350 foreign delegations from 45 countries, and some 42,000 trade visitors from 70 countries.

The deputy prime minister said new security technology played a very important role in confronting current security challenges and if used responsibly, it could make a difference in making the world a better and safer place.

Thus, he said, security conference and exhibition were the perfect stage to promote market interactions and induce greater commitments which in turn, benefited both parties demanding and supplying the security technologies.

“Malaysia is committed to see the development of NATSEC Asia in providing not just market solutions to end-users of security technologies, but also the intellectual solutions to policy makers,” he said.