Saturday, December 3
You are at:Home»News»Sabah»Big-nosed males get the ‘girls’ 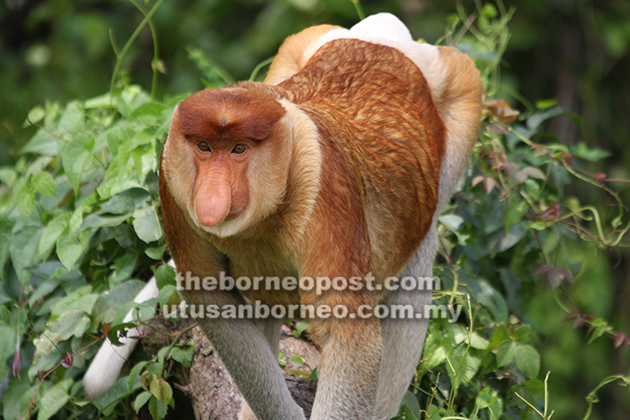 KINABATANGAN: Exaggerated male traits, such as a large nose, can be great for attracting females, finds a study of proboscis monkeys in Sabah.

The study published yesterday in Science Advances. Scientists from Sabah Wildlife Department, Danau Girang Field Centre, Cardiff University and Kyoto University found a clear link between males’ nose size and the number of females in their harems, clearly showing that size does matter!

“During this study, morphological measurements and behavioural observations in free-ranging proboscis monkeys were carried out in the Lower Kinabatangan Wildlife Sanctuary,” explained Dr Ikki Matsuda from Chubu University and Kyoto University in Japan.

“We also recorded the vocalizations of male and female proboscis monkeys at three different zoos: Yokohama Zoo in Japan, Singapore Zoo and Low Kawi Zoo (Sabah). Based on the collected data, we tested the correlations between body mass, facial characteristics, testicular volume, vocalizations and number of harem females in captive and free-ranging proboscis monkeys,” he added.

In addition to finding that enlarged male noses serve as advertisements to females in mate selection, Matsuda said they  also found that males with larger noses also tended to have larger body mass and testis.

“This suggests that nose enlargement is a reliable predictor of social dominance and high sperm count,” he said.

Dr Sen Nathan, Assistant Director of Sabah Wildlife Department and PhD student at Cardiff University and Danau Girang Field Centre, said although the unique nature of the “odd-nose” proboscis monkey had long been admired as an extremely attractive visual feature by biologists and the general public alike, explanations for its evolution had so far been gleaned more from folklore than from science.

“We show evidence supporting both male-male competition and female choice as causal factors in the evolution of enlarged male noses. We also observed that nasal enlargement systematically modified the resonance properties of male vocalizations, which probably encode male quality. Our results therefore indicate that the audiovisual contributions of enlarged male noses serve as advertisements to females in their mate selection,” said Nathan.

they expect that theb study will shed light on the hypothesis of audiovisual coevolution of exaggerated male traits in primate lineages and provide further evidence for the evolutionary pathway of enlarged noses in proboscis monkeys.

“The proboscis monkey is endemic to Borneo and is a totally protected species in Sabah. Every piece of information that allow us to better understand the behavior of these charismatic animals is important. Now our tour guides will be able to tell their guests that size matters, and that males with larger noses attract more females in their harem,” added Goossens.

He said the Sabah Wildlife Department and Danau Girang Field Centre are currently preparing a 10-year State Action Plan for proboscis monkey that will assist the state in conserving this charismatic species. This study was partially supported by Sime Darby Foundation.