Saturday, May 28
You are at:Home»News»Sabah»Russian Centre of Science and Culture opening in KK 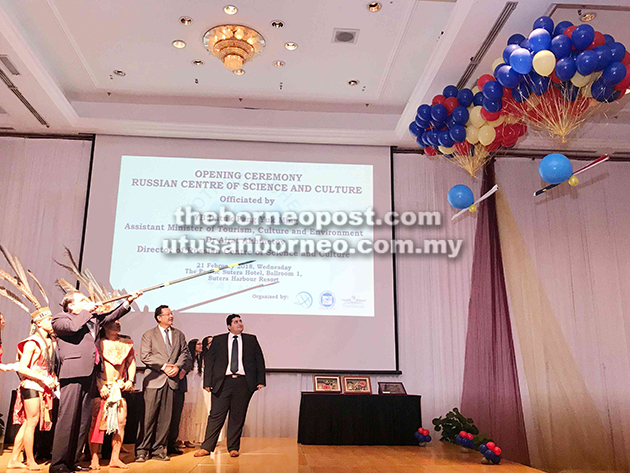 Anatolovich blows at the blowpipe at the opening ceremony while Pang (second right) and others look on.

KOTA KINABALU: The opening of the first Russian Centre of Science and Culture (RCSC) branch office in Sabah will expand the relationship between Malaysia and Russia in the culture, economic and education spheres, said Chief Minister Tan Sri Musa Aman.

“The RCSC has been operating in Kuala Lumpur since 1981 and now a branch has been established in Sabah, which I view as a positive step.

“This effort will introduce Russian culture to more Malaysians in Sabah and will also serve to promote what Sabah has to offer to Russians,” Musa stated this in his speech, which was delivered by Assistant Minister of Tourism, Culture and Environment Datuk Pang Yuk Ming, who represented the Chief Minister in officiating at the opening ceremony of the centre here yesterday.

The centre is located at Damai Point and will be open on March 1.

Musa said the RCSC was a good platform to further boost the tourism industry, and he believed that the setting up of the branch office would not only introduce the Russian culture to more Malaysians in Sabah but would also act to promote Sabah culture to Russians.

“This centre is also a timely step in encouraging further economic, education and research and development exchanges for both countries.”

In terms of education, he said the Kursk State Medical University (KSMU) Russia had produced over 1,000 Malaysian graduates in the field of medicine.

He said a majority of these graduates were now serving in government and private hospitals or clinics in Malaysia.

“I understand that at present, KSMU has around 570 Malaysian students.

“We hope to see more graduating from this university and eventually serving back home.”

As the Honorary Professor of KSMU, Musa said he was proud to note that the many Malaysian graduates from this university.

He said medical care was crucial and remained an important part of ensuring a healthy society, where preventive care was focused on and where treatment was given through heavy government subsidies at government hospitals.

He hoped to see more Malaysians from Sabah heading to KSMU to do medicine.

“It is my hope that this new centre will expand on the existing cooperation between the two countries, and ultimately towards better education, economic and cultural exchanges.

“The Sabah State Government is always open to discussing possible ventures and we will do our best to facilitate investments and other programmes that are proposed,” he added.

Meanwhile, RCSC director Dr Airat Akhmetov said there were 72 Russian Cultural Centres in the world, all of them representative of Rossotrudnichestvo, the federal agency for the Commonwealth of independent states, compatriots living abroad and international humanitarian cooperation, which operated under the jurisdiction of the Ministry of Foreign Affairs of the Russian Federation.

“The activities of Rossotrudnichestvo and its foreign missions are aiming at implementing the state policy of international humanitarian cooperation, promotion abroad of an objective image of contemporary Russia.

“The priority of Rossotrudnichestvo is cooperation with foreign countries in the field of education, culture and Russian language.”

He went on to say that Russia had become a popular hub for students all over the world to receive an exceptional quality higher education for a reasonable price.

“Today, Russia has a ready network of universities that are used to training international students especially in science, technology and medicine.”

He said Malaysia held the first place among Southeast Asian countries in the number of students studying in Russia.

He said there were currently about 4,000 Malaysians living and studying in the country.

“The diplomas of Russian higher educational institutions are valued in the fields of science and technology and now we are promoting not only medicine specialties, but engineering, machinery, air crafting and oil and gas industry.”

He added that nine Malaysian students were sent to study in Russia on a scholarship programme, and the new intake for another nine Malaysians to pursue their higher education in the country on scholarship has just opened.