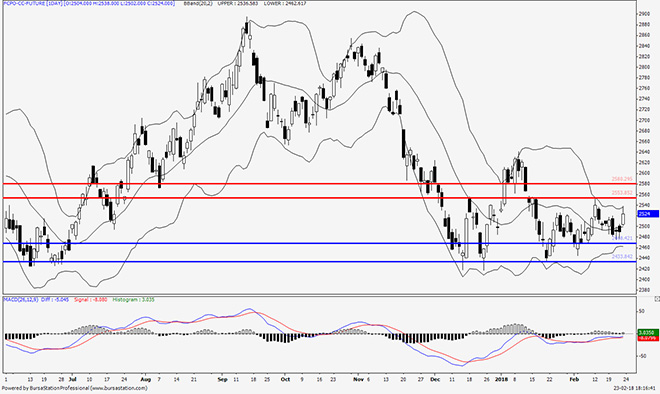 Malaysian palm oil futures edged up 1.12 per cent, as market sentiments turned bearish on a less than expected drop in output.

The benchmark crude palm oil futures (FCPO) contract dipped 1.6 per cent to RM2,456 on Friday, which is RM28 higher than RM2,497 during the previous week.

Societe Generale de Surveillance (SGS) reported that exports of Malaysian palm oil products during February 1 to 20 rose 9.5 per cent to 815,183 tonnes from 744,706 tonnes shipped during January 1 to 20.

Output in Malaysia, the world’s second largest palm producer, is forecast to decline from a month earlier, in line with seasonal trend and on fewer working days in February.

Data from Southern Palm Oil Millers Association (SPPOMA) showed a 22.6 per cent fall in production for the February 1 to 20 period, lent support. There was some short-covering from traders who sold down on Tuesday.

Most Asian currencies recovered some of their recent losses on Friday as a retreat in US Treasury yields boosted risk appetites and pushed regional assets higher.

According to the FCPO daily chart, the market slipped from last week’s gain and rebounded to week-high of 2,524.

Based on the daily candlesticks chart, Bollinger Band showed a changing trend might occurred this coming week. The market may test first resistance points at 2,533 and we should observe and wait for stronger market signal to initiate new positions.

In the coming week, aggressive traders could initiate new positions if the trend breaks above first resistance points while conservative traders should consider holding current position and wait for stronger reversal signal to enter the market.

ITS and SGS reports will be released on February 25.