Friday, August 14
You are at:Home»Columns»Who owns more land in Sarawak? 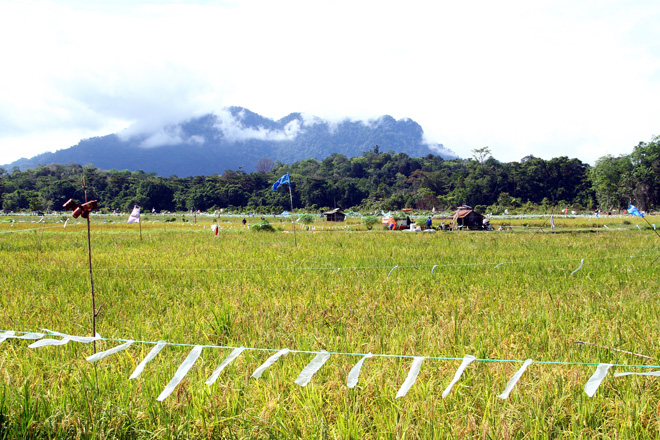 Who owns most of this land?

WHENEVER I watch the TV and see people crossing the Mediterranean Sea in overloaded and rickety boats, I wonder why they have to gamble with their lives, as if life as such is not that precious.

At the same time, I realise that humans are prepared to risk their precious lives and limbs for something equally important in life: freedom and the odd chance to lead a new and better life elsewhere. In the case of those crossing the Mediterranean, their promised land is Europe.

People want to get away from their home country for certain reasons – away from political or religious persecution at home. Famine and poverty are among other reasons. Staying put means little prospect of a better life. There may be the ‘promised land’ across the seas or beyond those mountains.

This human behaviour has not changed since time immemorial – ever since the Homo sapiens began to learn how to walk.

Historical records are available to those who wish to study why, how and where humans have moved from place to place at varying periods in history, all the time throughout the world.

For today, however, let’s touch very briefly on how Sarawak during the Brooke era increased its population by way of immigration.

Two major events during the Brooke Raj were responsible for this increase. One event is fully recorded in a book considered by many as an official history of Sarawak, and the other, even though hardly mentioned in other books about Sarawak, is actually a fact. That event therefore forms part of the history of the state in terms of gift of land by the government to people who needed it in the past.

Land for the Foochow

With the encouragement of the Brooke government, since 1889, Chinese mainly from south China started to come to Sarawak via Singapore for work and trade. They had originally intended to return home, but as it transpired, most of the immigrants did not go back home. They liked it here; they helped develop the economy of Sarawak.

And in 1901, the government sponsored a mass immigration of Foochows to Sarawak; the Rajah, Charles Brooke,

wanting them to plant rice on a swampy area around Sibu. In the event they planted some rice but most went for rubber when the price of the commodity was fetching a better price on the world market at the time.

Other immigrants from China, individually or organised by agents, had come to Kuching and to other districts to trade before and after 1901. Those who came to Kuching and Lundu planted pepper and gambier.

Slowly the trade in sago sourced from Mukah District began to be dominated by the new traders based at Kuching. They too contributed to the economy of Sarawak.

One of the main reasons: religious persecution of the Christians in China. There were other reasons too – to make money from foreign soil.

In 1925, another group of foreigners started moving to Sarawak. This time it was the Bugis from the Celebes (Sulawesi).

The Third Rajah, Vyner Brooke, allocated some 5,000 acres of land for the planting of coconuts in the Simunjan District and Sarikei for the immigrants. They had no intention to go back to the Celebes.

By 1974, the Bugis population in Sarawak stood at around 1,000. I don’t know if this figure includes those new arrivals recruited to work in the oil palm plantations in the Bukit Peninjau and Sungai Tangit in the Miri Division.

At home in the Celebes, land was scarce because most of it had been given to rich people; what was left of the land was unsuitable for coconuts. So more fertile land was needed for the purpose; so off to Sarawak for such land.

A number of Sea Dayaks (Iban) in the Saribas, the Skrang, Batang Ai and the Lemanak areas began to move out of their areas during the time of the Brookes for more land for rice and game. Exact year(s) of pindah (migration) are not known to the narrator at this stage. All these internal ‘moves’ took place during the reigns of Charles Brooke and his son, Vyner Brooke.

They pindah to the Fourth Division (Niah, Suai, Sebuti) and Fifth Division (Medamit, Lubai and Lawas). They cultivated land for rice, they reserved forest groves as sources of timber for house construction or boats. They have been calling this land pemakai menoa/pulau galau.

I have seen a couple of documents given by the Brooke Raj and the colonial government of land to the Iban settlers in Niah, Sebuti and Limbang. I could not work out the acreage of the land granted to the settlers.

Later-day pindah or internal migrations took place in 1950s. For example, the Iban from two longhouses in Nanga Mujan in Lubok Antu were moved by the colonial government to Lundu and resettled at Nanga Sebandi. They were settled on land parts of which especially at Tanjong Bemban and Tanjong Sejehin had been farmed and thus become the temuda, the pemakai menoa/pulau galau claimed by the earlier settlers, the Sebuyau Iban who had migrated earlier to Lundu. They were there long before the Brookes became the rulers of Sarawak.

It’s all about land

Let’s pause here for a while and read this article against the current disputes over ownership land which is not under title.

The more I think of the worries about the fate of the aboriginal peoples whose land ownership is being questioned, the more ironical talk about protection of native rights over land in Sarawak has become. The native landowners are supposed to be protected from exploitation by the capitalists but the big plantation and forest licensees are the people whose assets are better protected by law than the natives, who can only claim rights over their lands acquired through their customs. They are the least protected by the system. Their ownership of land is not guaranteed like land registered under the Torrens system. As a result, they may lose all their rights over land which is not under title, unless something is done by the authorities to ensure that they enjoy security of tenure of their land as well.

What about rights of the former immigrants?

According to information which I have got, the letter giving land to the Bugis settlers along the Sadong River (Pendam, Iboi, Pelandok Ulu, Jaie, Rangkang, Sungai Bilis/Sungai Putin and Rangawan) could not be traced for evidence of the grant of land from Rajah Vyner Brooke (Journal of Malaysian Historical Society, Sarawak Branch No. 3.)

I suppose most of this land given to the Bugis has been parcelled out and indefeasible title has been issued. If this is the case, then the Bugis are better off than the local indigenous Malays or the Dayaks in the same general area in terms of security of tenure of their holdings.

It is painfully obvious that land is a vital component of a pindah or immigration. In the case of the Foochow, each man in a family was given at least three acres to cultivate; the Bugis were given 5,000 acres to be shared among the Bugis immigrants (Wajok and Bonin), who later joined the pioneers (Riok Daeng Paliweng, Abdul Rashad Benu, Daeng Pabilaie’ Bachok, and Abu Bakar Daeng Manggata).

Now who says that Sarawakians have not been treated differently? The immigrants were given ample land with the security of tenure while the natives with NCR rights were allowed to move on land under licence only.

Even these customary rights over land are being questioned. When the Land Code was approved in 1958, the native landowners were not given indefeasible title to their lands – a discrimination that has caused loss of their rights to land such as their territorial domain.

Who owns more land in Sarawak in terms of market value and acreage – the natives who live on land under licence or those who are registered proprietors of land under the present system?

Answer: in my opinion, it’s the latter.

Previous ArticleBitcoin versus Dow Jones: Who’s the king?
Next Article The week at a glance 25 February 2018