Monday, July 13
You are at:Home»News»Sarawak»‘Policies up for review to make S’wak tourism more vibrant’ 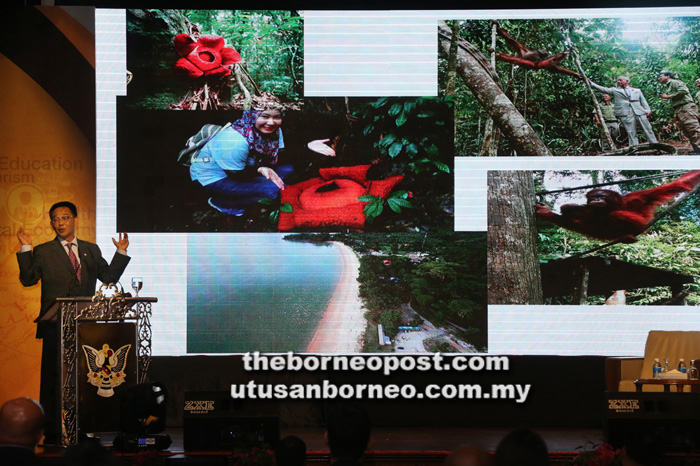 Abdul Karim stresses a point in his presentation on ‘Sarawak Tourism Blueprint’ at Sarawak Dialogue.

KUCHING: Sarawak is relooking at its strategies and policies to address several issues in the tourism sector and to improve what the state has to offer to visitors.

Minister of Tourism, Arts, Culture, Youth and Sports Datuk Abdul Karim Rahman Hamzah pointed out the need to improve the overall standard and quality of products and services within the tourism industry – from accommodation, restaurants, tour guides to packages – so as to grow the sector and make Sarawak a preferred tourism destination.

“Our national parks are very popular with both local and foreign visitors but there is still room for improvement as I notice that the facilities are not up to expectations.

“Things like accommodation, the washrooms particularly, as well as jetties and boats taking tourists to Bako National Park, for instance, need to be improved. The river is infested with crocodiles and I do not want to hear of any mishap,” he told reporters after delivering his presentation on ‘Sarawak Tourism Blueprint’ on the second day of ‘Sarawak Dialogue’ here yesterday, where permanent secretary to his ministry Hii Chang Kee and Sarawak Dialogue organising chairman Adrain Jerome were also present.

Abdul Karim said while the management of most – if not all – national parks are under Sarawak Forestry Corporation (SFC) and not under his ministry, he proposed for a joint management, at least for the parks most frequented by visitors.

“We are still looking into this. While they (SFC) want to conserve and preserve the parks, we want to promote them to the world. So I believe coming together is crucial and will allow us to do all three things (conserve, preserve and promote).”

On another issue, he said tour guides from outside are not allowed to take tour groups or visitors into and around the parks by themselves, as these parks insist on using their own rangers.

“Can you imagine the hassle? And can SFC park rangers speak Mandarin to cater to the Chinese groups? Tour guides can be trained and educated to guide visitors around the parks. Communications are ongoing and there might be a change of policy,” he said.

Noting such administrative flaws, Abdul Karim remained optimistic that these issues could be resolved internally without much delay; thus, hoping to see greater synergy and collaboration across the sector.

“Funding for improvement of national parks is under SFC. But overall, I hope to see some sharing of responsibilities. We cannot wait too long because more flights are coming in and if these problems persist, they would have an adverse impact on the tourism sector,” he stressed.

Moreover, Abdul Karim disclosed that he had spoken with the Attorney-General’s Office on the issuing of tourist guide licence by the state ministry, instead of Ministry of Tourism and Culture (Motac).

“Presently, the tourist guide licence is issued by Motac as tourism is deemed under the federal government list, but the state government does not fully recognise this.

“I feel that tourism has been taken away from the state. I am very firm when it comes to this (tourism matters relating to Sarawak). In the first place, tourism was not even a subject in the state or federal or concurrent list when we formed Malaysia in 1963,” he added.

Abdul Karim explained that in 1994 when the Federal Constitution was amended without consultation with Sarawak, tourism was ‘secretly’ inserted in the Ninth Schedule and became a federal matter.

“The state will not give up in pursuing this matter – that’s why we have our own ministry and Sarawak Tourism Board to look at our tourism matters.

“We want the state ministry to issue the licence where we conduct our own courses so that the tourist guides are technically competent about Sarawak,” he emphasised.

Presently, candidates applying for tourist guide licences are required to attend a six-month course under Motac in Kuala Lumpur or Kuching – all of which are self-funded.

“Overall the fees cost RM6,000 to RM7,000. It is expensive and no one will come forward to sponsor you. But it is more important for a Sarawakian tour guide to be well-versed about Sarawak than things in Peninsular Malaysia, because they are not going to work there (peninsula) but here.”

Abdul Karim added that Sarawak needs more people to take up tourist guiding as a professional career and not as a part-time job.

He also said homestay operators face similar problems in obtaining the licence, but he assured them that the ministry would look into this as well.

“We will address things slowly, plus we want to see more developments in the tourism sector in tandem with the state and infrastructure development,” he added.