Monday, December 5
You are at:Home»World»Australia amnesty takes 57,000 guns off the streets 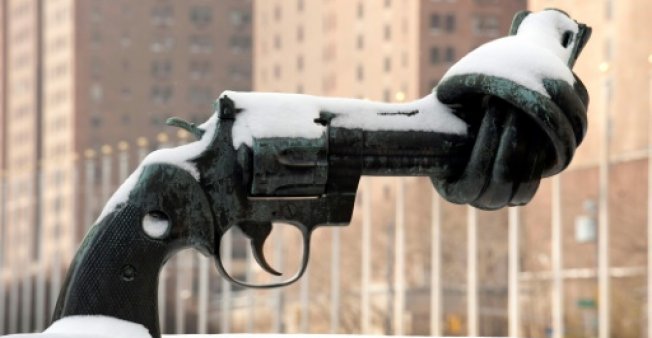 More than 57,000 illegal firearms have been handed in during the last three months during a gun amnesty in Australia. AFP photo

SYDNEY: More than 57,000 illegal firearms, many of them automatic or semi-automatic weapons, have been handed in under an Australian amnesty that authorities Thursday said had made the country safer.

A final count from the three-month campaign to remove weapons from the streets came with debate over gun reform rampant in the United States after a mass school shooting in Florida.

Australia’s strict gun laws, enacted after a 1996 mass shooting that killed 35 people, are often held up by safety activists as a model for the US to follow. The country has had no mass shootings since.

The first national amnesty since Martin Bryant went on the rampage armed with semi-automatic weapons at the historic Tasmanian colonial convict site of Port Arthur 22 years ago netted 57,324 firearms.

Running from July 1 to September 30 last year, almost 2,500 of them were fully-automatic and semi-automatic.

Law Enforcement Minister Angus Taylor said it was a great example of what could be achieved “when governments and the Australian public work together to make our communities safer”.

“Taking these unregistered firearms off the streets means they will not fall into the hands of criminals, who might use them to endanger the lives of innocent Australians,” he said.

“The government is committed to removing illegal firearms from our community and tackling gun-related crime.

“The next step of our ambitious agenda is passing our legislation that cracks down on gun trafficking.”

Among more unusual items handed in was a sten machine gun, best known for their use by British forces during World War II, and a small French Garter gun.

A rocket launcher, which the owner said was found at a local tip, was also handed over.

Ahead of the amnesty, which was prompted by fears of terrorism and an influx of illegal guns that saw a spate of gangland shootings, the government said it believed there were as many as 260,000 illicit weapons on the streets.

People were allowed to hand in unregistered or unwanted firearms with no questions asked. Outside this, they face fines of up to Aus$280,000 (US$212,000) or 14 years in jail for illegal gun possession.

All guns in Australia must be registered, although many arrive illegally from overseas through organised syndicates. – AFP