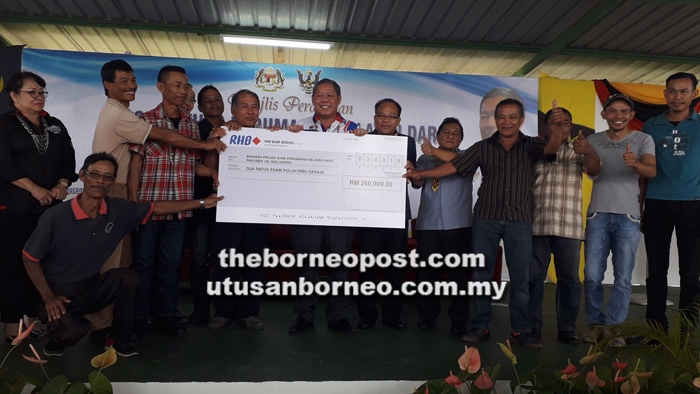 Nogeh (7th right) handing over the mock cheque to the representatives of the participants of the special housing projects for inland fishermen in Mas Gading.

KUCHING: A total of 1,166 inland fishermen in Sarawak are eligible for the Special Housing Project this year.

Deputy Minister of Agriculture and Agro-based Industries Dato’ Anthony Nogeh revealed that some RM11.66 million had been allocated for the projects.

He said those eligible would be able to choose from three kinds of projects namely, the resettlement project, new housing project and house repair project.

“This kind of grant is to provide a better and conducive living environment for them.

“The inland fishermen play an important role in providing us good source of protein from fish harvested from rivers and streams,” he said after launching the Special Housing Repair project at Kampung Buso in Bau near here yesterday.

Nogeh, who is Mas Gading Member of Parliament, said a sum of RM260,000 had been approved for some 26 eligible inland fishermen in his constituency this year.

He said that they also receive RM200 per month each as relief allowance from the federal government.

He added that in Sarawak, a total of 1,334 inland fishermen were entitled for the monthly relief allowance since 2015, with 57 from the Mas Gading.

“The federal government is also giving relief allowance of RM200 to rubber tappers in Sarawak,  for three months during the rainy season.

The allowances and housing grants are some of the assistance provided by the Barisan Nasional government to ease the burden of the people in the rural areas.

Earlier, Nogeh presented the allowances in the form of mock cheques to the representatives of rubber tappers, inland fishermen and participants of the inland fishermen special housing project in Mas Gading.