Tuesday, May 24
You are at:Home»Business»BizHive»Crude Palm Oil Weekly Report – March 8, 2018 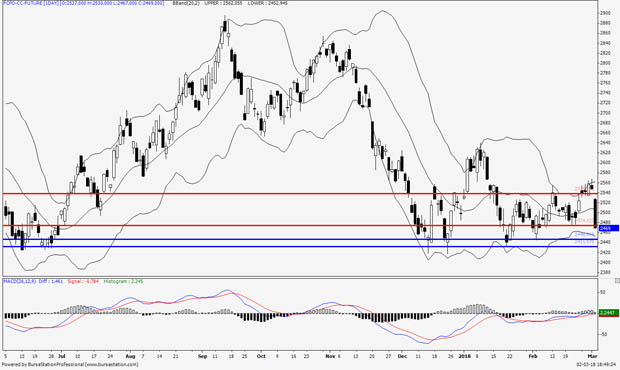 Malaysian palm oil futures rallied to a seven-week high and ended their winning streaks due to price pressure from US soybean oil and import tax raised from India.

The benchmark crude palm oil futures (FCPO) contract rose 0.5 per cent to RM2,469 on Friday, which is RM13 higher than RM2,456 recorded during the previous week.

Intertek Testing Services (ITS) reported that exports of Malaysian palm oil products for February 1 to 25 rose five per cent to 1.065 million tonnes, from 1.014 million tonnes shipped during January 1 to 25. (There was no ITS data available for full month of February)

Malaysian palm oil shipments have also been on an uptrend in February compared to the previous month. Exports were up five per cent during the February 1 to 25 period versus the corresponding period in January, according to data from cargo surveyor Intertek Testing Services on Monday.

The dollar index is down 2.1 per cent this year, dogged by suspicions that the Trump administration prefers a weaker dollar to help narrow the United States’ yawning trade deficit. Worries that Trump’s big tax cuts and spending plans will ramp up fiscal deficits to the extent that they undermine confidence in US debt have also hurt the greenback.

According to the FCPO daily chart, the market extended its gain to reach a seven-week high, and slipped from its winning streaks on Friday.

Based on the daily candlesticks chart, despite the market reaching its seven-week high, the selling momentum increased on Friday. It offset earlier gains and drove the price lower and broke second resistance points.

The selling momentum will carry on further until the following week. In the coming week, traders may initiate short positions and trade lower until the second support lines.