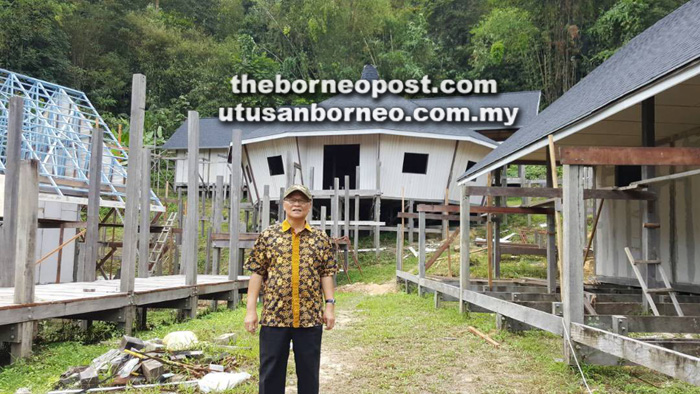 Minos stands in front of the baruk and longhouse in this photo taken last month.

KUCHING: The much awaited Bung Bratak Heritage Centre (BBHC) will finally have its soft launching on April 1.

Bung Bratak Heritage Association (BBHA) chairman Dato Peter Minos said according to the contractors and Public Works Department, the BBHC will be completed by March 17 in time for the soft launch.

The launch will be officiated by Deputy Minister of Agriculture and Agro-based Industries Datuk Anthony Nogeh Gumbek who is also Mas Gading MP.

“The soft opening of BBHC on April 1 will be a grand affair as the representatives of all the 36 villages in Bau and Lundu districts who originated from Bung Bratak will be invited.

“The descendants of Bung Bratak have strong sentiment for the ancient settlement of their ancestors,” said Minos.

Minos said the BBHC will only be open to the public on May 1 when the Bung Bratak Day is revived after a five year lapse.

It was last held in 2013 before the site was closed for the construction work.

“The Bung Bratak Day will be full of festivities and carnival-like, to attract thousands of people. It will be a showcase of Bidayuh culture and tradition.

He also said the BBHC, costing RM8 million and funded by the federal Ministry of Tourism and Culture, was identified by United Nations Educational, Scientific and Cultural Organization (Unesco) as the first and only hill-top ancient settlement being revived and developed for historical-tourism centre in the whole of Borneo.

He went on to say the Bidayuhs of the Jagoi-Bratak group are proud of this fact, and hoped that one day BBHC will be rated and made a world heritage site.

He explained that Bung Bratak, located on 1,000-foot high Bratak Hill, over 750 years ago was a big settlement of the Bidayuhs of the Jagoi-Bratak group.

“The history of Bung Bratak was even mentioned by both early Dutch and British writers and historians. With peace coming to Sarawak in 1841 under Rajah James Brooke, the Bung Batak settlers started to move downhill to other parts of Bau and Lundu districts.

“One group moved to Kuching district to form Kampung Bowang. Another group moved to the Jagoi Babang side, now in Kalimantan Barat, Indonesia near Kampung Serikin,” he said.

On BBHC, he said it will be a historical – tourism centre comprising two traditional longhouses, one for accommodating up to 100 persons and one for a seminar or conference hall, office and mini museum amongst others.

“BBHC also has a big Bidayuh traditional and ceremonial roundhouse or ‘baruk’, a big dining hall with kitchen and a reception hall.

“To be run and managed like a homestay /retreat, BBHC will welcome tourists and visitors and the charges will be at most favourable rates for accommodation, food and drink,” he said.

He also said tourists and visitors both foreign and local will enjoy the most beautiful scenery from atop Bung Bratak, fresh mountain air and virgin forests, two waterfalls and

“There will be jungle walks and heritage trails at BBHC. A fruit garden and a herbal centre will be developed too,”  he added.