Wednesday, December 7
You are at:Home»Features»The politics of guns 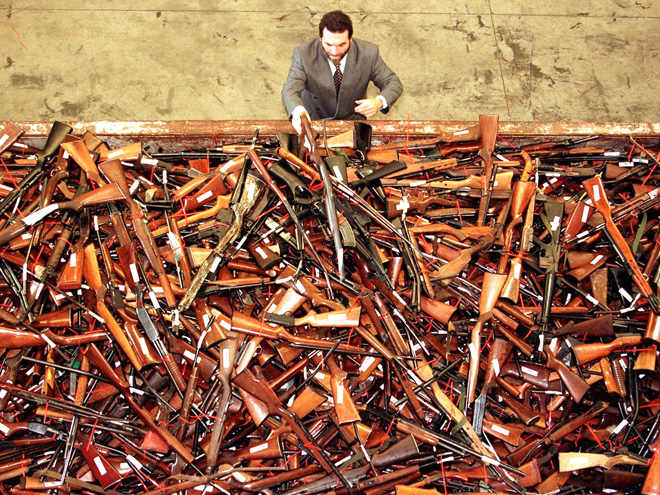 Reuters file photo shows a firearms-reform project manager looking at a pile of 4,500 prohibited firearms in Sydney, which were handed in under the Australian government’s buy-back scheme in 1997.

THE Americans should learn from the Australians in terms of gun control if they want to avoid further mass killings of school children in America.

With due respect to President Trump (not my president, by the way), his suggestion that a teacher at every school should be armed with a gun is not good enough. Nor can the stationing of a law enforcement officer at every public school in Florida, as proposed by the state’s governor, prevent a criminal who is mentally sane or insane but armed with an assault rifle from carrying out his intention to kill children or anybody.

This policy is a waste of resources and time – the teacher should focus on teaching, not on constantly fiddling with his gun at the ready and simultaneously keeping an eye on the windows and roads leading to the school, and the policeman deployed elsewhere where he can be more useful.

The best way is to take away the guns from the owners if they refuse to voluntarily surrender them to the authorities under a periodic amnesty for destruction and rendered unusable.

The Aussies offer this amnesty to gun owners without adverse problems to gun owners. Last year some 57,000 guns were voluntarily surrendered to the police for destruction under a three-month firearms amnesty. Not many years ago, during the Howard Administration, there was another amnesty. This saved a lot of Australian lives, including those of children. Not that killing by guns has stopped in Australia but mass killings. Killing humans is a human culture everywhere; it will not stop until kingdom come.

What about Malaysia’s solution?

If the Aussies’ gun control model is not good enough, then try out the Malaysian model. In Sarawak, it is not easy to get a licence to carry arms. We have better laws here – the Penal Code and the Firearms Act, 1960. These are colonial era legislations but are still effective to govern the proper use of guns. These are mostly shotguns, single or double barrelled, or airguns, not the automatic or semi-automatic. Owned by farmers, and under licence requiring regular servicing and checks when the licence is renewed annually, who abide by the law. Cartridges are limited to each gun owner and used cartridges (kerubong seterum) are to be produced before the licence is allowed to buy more bullets.

Not that no one has been killed with a gun. Almost every year, there are reports of shooting by humans of a human mistaken for a wild boar or a monkey. In fact, the few gun killings in town have not been solved but these involved shotguns. With this type of weapon, the most you can kill is one or two, not 17 at one go; with automatic or semi-automatic rifles you can kill more.

I’m not suggesting you, my reader, to take me literally unless you are insane.

But criticise this policy and you will be referred to the freedom to own guns as a right, not as a privilege, under the Second Amendment to their Constitution even though that Amendment applies (controversial) to use of guns by the militia, not by every mad American, or one who is underage but full of money to buy guns, not one gun but two or more; not a shotgun or an air rifle aimed at birds but automatic or semi-automatic handguns or even assault rifles from certain supermarkets in certain states. And certain states are strict with background checks of the intending buyers, others are slack – strict with the Blacks and not so strict with others.

Incidentally, talking about guns, once a friend, a former police officer in the Sarawak Constabulary, and I were window shopping in Pontianak some 20 years ago. We stopped by a shop stocked with beautiful shotguns for sale.

For the fun of it – not intending to buy any even if allowed to carry it back to Sarawak – we enquired about the prices of the various categories of guns. My friend bought an accessory (telescopic sight) to be mounted on his gun at home (he had bought the gun in Sarawak during his time in the police). No questions were asked if he was an Indonesian eligible to own a gun under the relevant Indonesian law or whether he was a foreigner. On the face of it, anybody could buy a gun from Pontianak 20 years ago. Now???

In the Philippines, especially in Davao, a friend of mine was telling me that every Filipino man carries a handgun. But as a Malaysian, he was not allowed to carry one but allowed to employ a Filipino as a personal bodyguard to accompany him wherever he went in Davao. He was looking for durians one day. Who needs a bodyguard when buying durians in Kuching?

There’s more than meets the eye in the American gun ownership issue. Guns are part and parcels of politics there. The NRA is believed to be one of the chief funders of candidates running for political office in America. So when you see on the TV school pupils demonstrating against poor gun control, you will realise the important role of bribe money in elections and the reluctance of those senators allegedly accepting bribes to condemn the NRA. Just like in Malaysia, do you dare to say anything critical about the vested interests who bankroll elections?

I admire the move by school children in America, especially those who are mourning the deaths of so many of their class/schoolmates in a school in Florida recently. Their collective voice may be small, yet it contains an important message to the people walking on the corridors of power: the future leaders of America are not happy with their present leaders who kowtow to the NRA.

No American school students in such large numbers have ever shown such great concern over the mass murder of school children before the latest massacre. We have heard of university students protesting against the atomic bombs while school children were at their studies in the classrooms. Now they have taken to the streets and who can tell what millions of them in other schools taking to the streets will do if their message to the rulers is ignored.

Signs are that President Trump, in a dilemma – listen to schoolers or to the gun lobbyists, is beginning to listen to the former.

As I suggest above, America should look East – to Australia and Malaysia for gun control methods. Look at our Firearms Act 1960.