Saturday, October 31
You are at:Home»News»Sarawak»Miri Airport upgrading to be completed end of 2019 — Lee 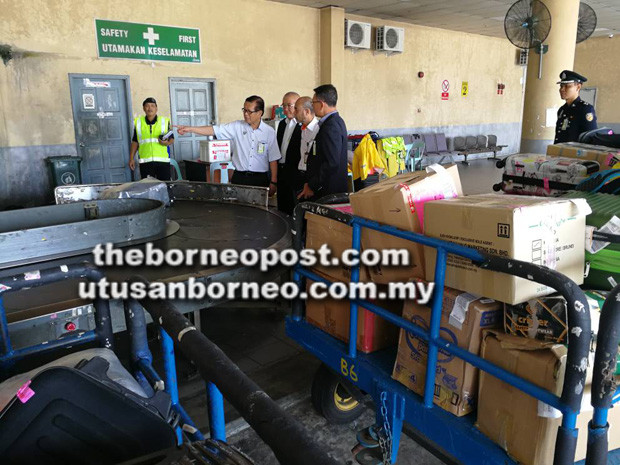 Lee gestures during the walkabout at Miri Airport with MAHB officials to check the proposed upgrades of facilities under the optimisation plan.

MIRI: The Miri Airport upgrading project will be completed by the end of 2019.

Upon completion, the airport would be able to cater for three million passengers per annum and have more modern facilities to better serve domestic and international passengers.

Among the new facilities would be a separate departure hall for domestic passengers and more immigration clearance counters and an arrival gate for Rural Air Service (RAS) passengers, Assistant Minister of Tourism, Arts and Culture Datuk Lee Kim Shin said.

“These would be carried out under Miri Airport Optimisation Plan pending the upgrading and rebuilding of Miri Airport in the long term plan,” he said at a press conference before a walkabout at the airport yesterday.

A separate departure hall for international flights to cater for about 160 passengers, or a full jet aircraft load, will be included in the long-term plan, he added.

The airport parking area expansion started in January this year and would add another 200 lots to the current 412, while the terminal building upgrading and reconfiguration will start as soon as the consultant has finalised the design.

Lee said the current passenger load had shot past the designed capacity of two million passengers annually about eight years ago, and after a slight dip in the past three years, had surged back this year.

“There has been a five per cent increase in January compared to the corresponding period last year, and the slight dip from 2015 to 2017 was due to the downturn in the oil and gas industry,” he said.

Transport Minister Datuk Seri Liow Tiong Lai, when declaring open the newly-extended apron and covered walkway of the airport costing RM68 million in the 2016 state election campaign here, said the federal government through the Ministry of Transport was making the expansion and upgrading of Miri Airport, estimated to cost RM285 million, its top priority.

Lee expressed his gratitude to Liow and the federal government for approving the much-needed upgrading project for Miri Airport as well as putting the project in their priority list.

“Mulu Airport is currently handling passenger traffic at 120.2 per cent while Miri Airport has a terminal utilisation rate of 110 per cent,” he told reporters during a media briefing session with Mavcom here.

MAHB is optimistic that the optimisation plan for Miri would cater for the demand until 2027, but said a surge in number of passengers from more international airlines could accelerate realisation of this capacity.