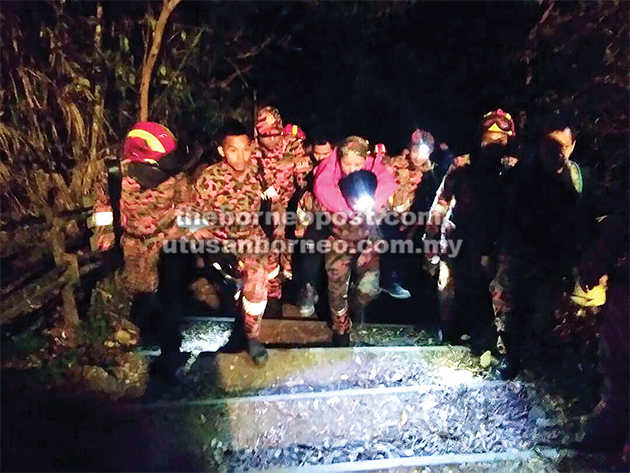 KOTA KINABALU: Some 239 climbers who were stranded at the top of Mount Kinabalu during yesterday’s 9.06 earthquake have safely arrived at Timpohon Gate from Laba Rata.

“They experienced Acute Mountain Sickness and have to be given a piggyback down by Mosar team,” he said yesterday.

Affendy said the search and rescue members were divided into eight teams and the stranded climbers were taken down in stages.

The fi rst team reached Timpohon Gate at 1.28am yesterday while the last team arrived safely at 4.19am, about seven hours after the 5.2 magnitude earthquake hit at 16km South West of Ranau at 9.06pm on Thursday.

In a twitter update, Masidi said the last climber arrived at Timpohon Gate, the starting point of climb, at 4.20am.

In reply to a question by netizen regarding town alarm systems in Ranau and Kundasang as well as preparation of boarding schools with standard operating procedures in times of emergency, Masidi said: “Alhamdulilah semua selamat” (Praise God, all are safe).

The six-second earthquake could be felt in Kota Kinabalu, Kolombong, Lintas, Penampang as well as some part in Papar.