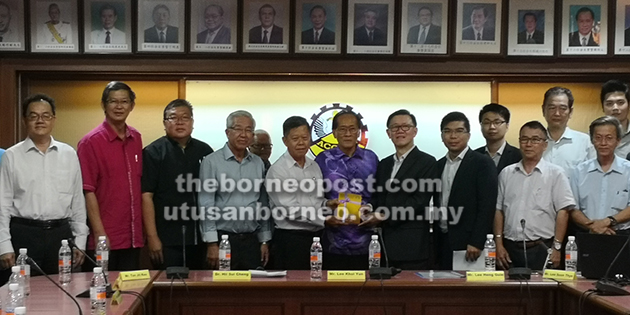 Tan (front, fifth left) presents a memento to Lee after the presentation of the talk. At sixth left is Hii.

KUCHING: Embracing technology is now a must for local commercial and industrial players, in view of digitalisation being the key to the future.

In this regard, Socio-Economic Research Centre (SERC) executive director Lee Heng Guie points out that businesses and industries must look further and start preparing for the future.

‘From hereon, the economic landscape will move rapidly and become more complex; so we need to be fully and adequately prepared in order to sustain and be more competitive.

“It means that after the forthcoming general election, the business community needs to refocus and prevent from dwelling on too long in a negative situation or thoughts that might hold them back from moving forward,” he said after presenting a talk on ‘Economic Update: What’s next for Malaysia?’ at Associated Chinese Chambers of Commerce and Industry of Sarawak (ACCCIS) headquarters here yesterday.

Lee also reminded all those present that Malaysia would have less than two years to achieve its Vision 2020 – its goal of becoming an advanced nation with an ideal social and political environment.

In this respect, he said it would be vital to strengthen the qualitative sources of growth such as sustaining quality investment, digitalisation, uplifting of the potential in small and medium enterprises (SMEs) as well as supportive fiscal, monetary and financial policies.

“The overall economic growth outlook for Malaysia is encouraging this year, as we estimate the gross domestic product (GDP) growth of 5.1 per cent this year.

“This growth is expected to be led by domestic demands, albeit at a slower pace. The double-digit export growth would remain, which I estimate at 7.5 per cent,” he said.

Lee also said the coming general election could provide the ringgit with headwinds in the first half of the year, but good economic and financial fundamentals are expected to be supportive of this currency.

He said the expectation would be for the ringgit to trade between RM3.80 and RM3.90 against the US dollar by end of this year.

SERC serves as a think-tank body that provides independent and objective research works as well as deliberation of industry and socio-economic issues concerning the interests of the local business community and development of the nation’s economy.

It also aims to strengthen the link between the government and the private sector, as well as to function as a focal point for economic, financial and industry issues-related researches.