Tuesday, July 27
You are at:Home»News»Nation»Selangor residents fed up with water crisis 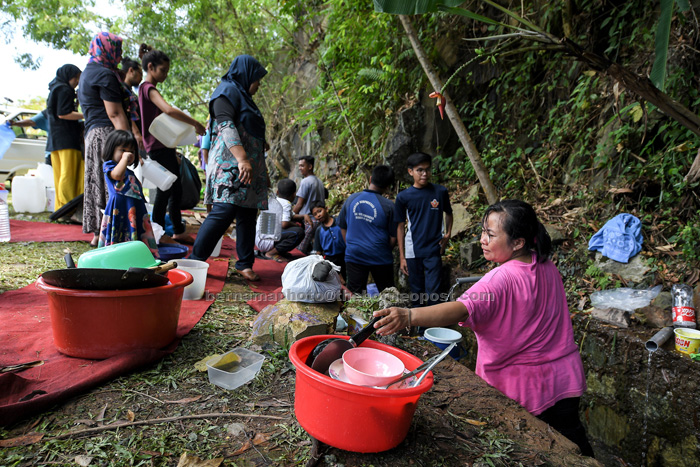 Residents use water from the hills for daily use such as washing clothes and plates. — Bernama photo

KLANG: The people of Selangor yesterday expressed their exasperation with the state government for its inability to solve the water crisis which caused great inconvenience especially to senior citizens.

A survey by Bernama around Klang found mineral and drinking water had run out of stocks in most shops and supermarkets.

A senior citizen who wanted to be known as Mak Tom, 69, said as a Selangor resident, she was fed up with the frequent water supply disruption as it was a big burden to her as a person with knee problems and frail health.

Mak Tom who lives in Taman Sri Andalas here said the area had been experiencing water cut since Tuesday and she had completely used up her stored water since then.

“I kept water as advised by Air Selangor. Use it sparingly. But when the plant broke down, the water supply cut has been extended and now I have to carry water.

“The water tanker which is suppose to come, is nowhere to be seen. And I have to get my neighbours’ help to carry water as I have knee problems,” she told Bernama when met at a water distribution stand set up by Air Selangor in Jalan Sri Siantan 43, here yesterday.

The survey also found more than 100 residents from Taman Seri Andalas and Taman Sri Bayu as well as several nearby areas rushed to the location to replenish their water supply as the disruption could go on until Sunday.

“Despite the water cut, I still have to cook for my four schoolgoing children and husband. Buying food would be too costly.

“To reduce using water, we lay our plates with plastic sheets. Besides we do not have much space to store water as our apartment is only 700 sq ft,” she grumbled.

Describing the water disruption as more detrimental than power failure, Mazila fervently hoped the Selangor government would be more serious in handling the issue as it was torturous to the people who should not be shouldering such burden.

On Tuesday, Syabas said several areas around the Klang Valley would be experiencing water disruption until the next day following works to repair the Sungai Selangor Phase 3 (SSP3) water treatment plant

However, the restoration of water supply was delayed when the Compressed Air System at SSP3 failed to function causing five pipes measuring 1,100mm damaged and two collapsing from their structure.