Saturday, August 15
You are at:Home»News»Sarawak»SCV first among SEDC’s subsidiaries to kick off digital marketing 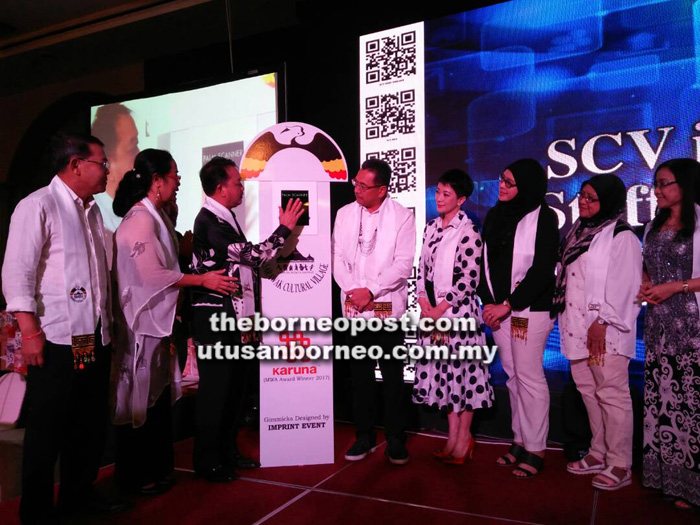 Aziz (third left) presses his palm onto a screen to mark the symbolic launch of SCV digital marketing initiative. He is flanked by Soedirman (fifth right) and Jane (second left).

KUCHING: The Sarawak Cultural Village (SCV) has become the first Sarawak Economic Development Corporation (SEDC) subsidiary to embark on digital marketing as part of its rolling initiatives to remain as an iconic tourism attraction to both domestic and international markets.

The digital marketing concept will revolve around Sarawak’s cultural attractions, as well as on its traditional delicacies.

“We are proud that SCV has taken the initiative to start its digital marketing to promote itself locally and abroad. With digital marketing, anyone who wants to know more about Sarawak and SCV can do so through the click of a button,” SEDC chairman Tan Sri Datuk Amar Aziz Husain told reporters after officiating at the opening of SCV’s 28th staff anniversary celebration in Grand Margherita Hotel here on Saturday night.

Digital marketing, he pointed out, would be in line with the vision of Chief Minister Datuk Patinggi Abang Johari Tun Openg in developing the state’s digital economy.

According to Aziz, the perks of digital marketing include SCV being able to reach out to a wider population of potential tourists who have access to the Internet anywhere around the world.

“Right now, if we Google search the three letters – ‘S, C and V’ – we would be directed to the official website of Sarawak Cultural Village. With this, I hope that more tourists from outside the country would know about Sarawak and its various ethnic groups, as portrayed in the village,” he added.

Aziz said apart from holding cultural shows, SCV is also open for the public to host theme parties at the Iban longhouse, or even teambuilding activities and traditional weddings.

On another note, Aziz said the plan to carry out improvement and maintenance works on SCV might be realised in phases, beginning next year.

“Areas to hold the Rainforest World Music Festival will also be expanded to fit in more visitors. At the moment, the area is too small to cater for 10,000 revellers.”

The Saturday dinner also hosted presentation of special awards and certificates to outstanding members of the SCV staff.

In this respects, Aziz pointed out that SCV had contributed greatly to the state’s tourism industry.