Tuesday, January 21
You are at:Home»News»Sarawak»CM: My initiatives will propel the state 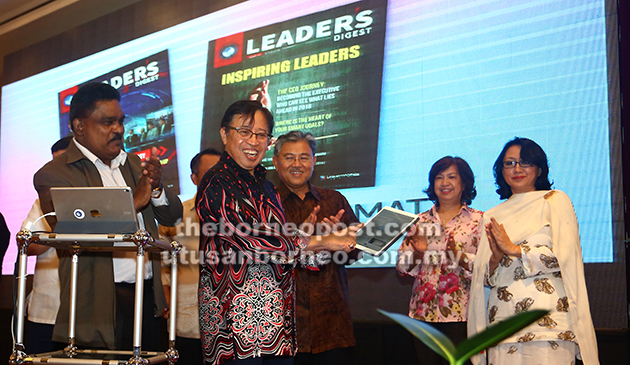 He said as a leader, one must be willing to take risks, much like what he has done in setting up Sarawak’s very own petroleum company Petroleum Sarawak Berhad (Petros).

“It is not easy to announce Petros due to factors such as its status and the laws that are involved.

“But I dare to take the risk because I believe that we have the legal argument in our favour, and I think we are on the right track because we feel that our legal position is very clear in the Constitution and it is the supreme law of the federation,” he said at the Leadership Institute’s Appreciation Night held here last night.

Abang Johari recalled that since he launched Petros, it has caused quite a stir throughout the whole country.

“I was even informed by my friend in Singapore today (yesterday) that the Straits Times there has a whole page about Sarawak gaining control of oil and gas,” he said with a chuckle.

He also reiterated that with the establishment of Petros, Sarawak would have regulatory control over its oil and gas and that industry players would have to comply with the state’s laws.

“It’s just like having your own land and title but if you want to build a house on your land, you would need approval from the government first. If the government says you need to amend the plan, then you have to do so even if it’s your land.

“The same applies with our oil. Sarawak has the right on its land and if Shell, for example, wants to put a platform here, they have to ask us. It is that simple and that is the right of the government,” he stressed.

He also informed that when he first took office as chief minister, he pledged that he would do his best to protect Sarawak.

“I believe I have that power in me and this is what leadership is all about. We must be daring enough to bring changes to ourselves and the country.”

During the dinner, Abang Johari also launched the Leader’s Digest – a fortnightly in-house publication which features a collection of articles on leadership and professional development.