Saturday, July 4
You are at:Home»News»Sarawak»The ‘cost’ of seeking treatment 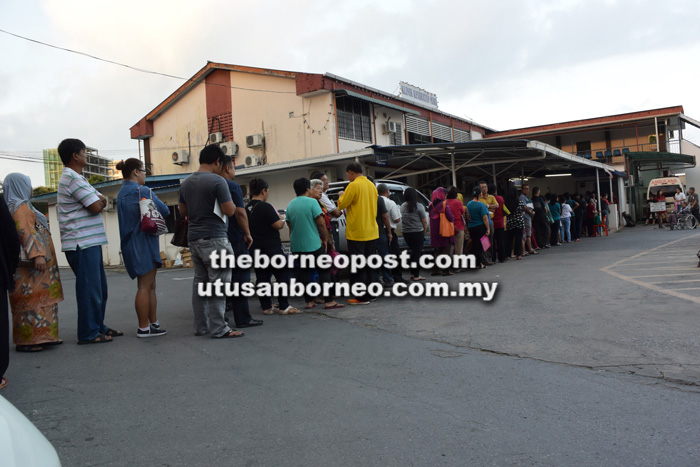 Patients stand in line waiting to enter Miri Polyclinic, where they would then have to obtain a number and wait once more to see a doctor.

MIRI: Queues lasting hours and an even longer waiting period to see a doctor are proving to be the bane of the sick and the elderly seeking treatment at Miri Polyclinic.

The near-daily scenario sees patients – some from as far as Bekenu – gather at the main gate as early as 4am in the hope of being among the first to obtain a queue number that would enable them to fulfil their medical needs earlier, meaning that they would then be able to return home early.

The plight of these patients prompted Piasau assemblyman Datuk Sebastian Ting to make a visit to the polyclinic yesterday, following complaints of the monstrously long time it would take just to see a doctor.

“The Miri Polyclinic implemented a new system on March 5. The new system allows the main gate to only open at 6am compared to 5am previously, due to the clinic’s official operating time, which does not start until 7.30am.

“Despite the notice of this change (of gate opening time), patients still queue up in front of the gate from 5am onwards. Numbers will only be issued to patients from inside the building, meaning that once the gate opens, we will see people rushing to come in (to get a number),” he said.

Ting pointed out that patients from afar face an even longer wait, as they arrive at the clinic as early as 4am hoping to be able to fulfil their needs so that they would have ample time to make the subsequent trip home.

“Some of these people are older than me and they are here because they are not well and in need of treatment. Waiting for hours is very tiring even for a regular person, what more to say those who are unwell. It is not right for them to (have to) go through this,” he said.

He stressed that he is committed to overcoming the long queues and waiting period at the polyclinic, and suggested that the clinic revert the opening time of its main gate back to 5am.

He added that two Rela members would be stationed in front of the clinic’s main door starting today to give out queue numbers to avoid any confusion among patients.

Ting said he is also looking to purchase a ticket-issuing machine soon to ease the scramble to obtain a waiting number.

“The medical staff will give me the brand (of the machine) and where to order it. I would also like to express my empathy to the people of Miri who have had to go through this, and I will make sure this issue will soon be resolved.”

Miri Polyclinic operates from 7.30am to 10pm on weekdays, and from 8am to noon on Saturdays. It remains open during lunch hours.

A notice – posted on the clinic’s main door – informs that starting March 5, clinic services begin at 7.30am and that patients are to collect their queue number from a counter inside the clinic from 7.30am onwards.

During Ting’s visit, a line of over 50 patients was seen leading to the clinic, where they would then have to obtain a queue number before waiting yet again to have their medical needs served. For the latecomers, that waiting period could last more than a few hours.