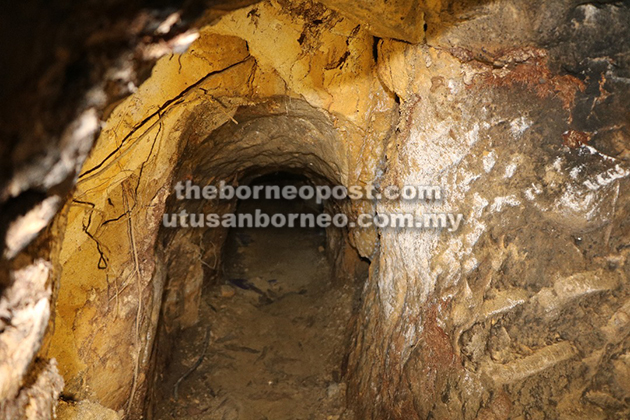 One of two tunnels on Bukit Kopungit measuring up to 60 feet long.

KOTA KINABALU: Four tunnels dating back to World War II have been identified in and around the city area and are planned to be developed into tourist attractions.

The Kota Kinabalu City Hall through its tourism committee is looking for new sites with potentials to become tourism products, the latest of which are the tunnels situated behind the Kota Kinabalu Community Hall and on the hills of Kampung Kopungit.

Its director-general, Datuk Joannes Solidau, said there would be continuous effort to discover historical sites because Kota Kinabalu had not many interesting places for tourists to visit.

“These tunnels are among the ones with the most potential for development because they are not far from the city centre, so it’s quite strategic.

“Moreover, the view from Bukit Kopungit is priceless because it overlooks the city and Tanjung Aru, all the way to Penampang.

“When tourists come here, not only do they get to see the historical tunnels, they will also enjoy a magnificent view,” said Joannes, during a site inspection with the media, yesterday.

The two tunnels on Bukit Kopungit are between 50 to 60 feet long, although the path is quite challenging and needs maintenance before visitors are permitted, to ensure safety.

Joannes said the second tunnel on Bukit Kopungit was the largest of the four inspected yesterday,  large enough for people to stand in.

“These tunnels were used by the Japanese in World War II as shelter, and bigger ones even led to larger spaces where they set up underground hospitals.

“However, the elements have claimed the labyrinth over the years with soil erosion, so some maintenance work is needed to develop these tunnels into a proper historical site.

“We will get into talks with the Ministry of Tourism, Culture and Environment as well as Sabah Tourism Board to determine the best approach for these potential attractions, where we will also discuss funding for this project,” said Joannes.

No reports of WWII artefacts have been found within the tunnels as they run too deep and were used mainly for shelter.

However, he said authorities could not confirm the absence of artefacts, as the tunnels had been around for a long time and locals might have found something earlier.

“We can’t be sure because this place has been invaded when the land was claimed for development, so it is possible that someone may have found artefacts first, but we don’t know because no such discovery was informed to the authorities,” he said.

Joannes added he was confident the place will be well received as an attraction because locals are already frequenting Bukit Kopungit for its hiking trails.