Wednesday, June 23
You are at:Home»News»Sarawak»Best of friends score 10A+s in SPM 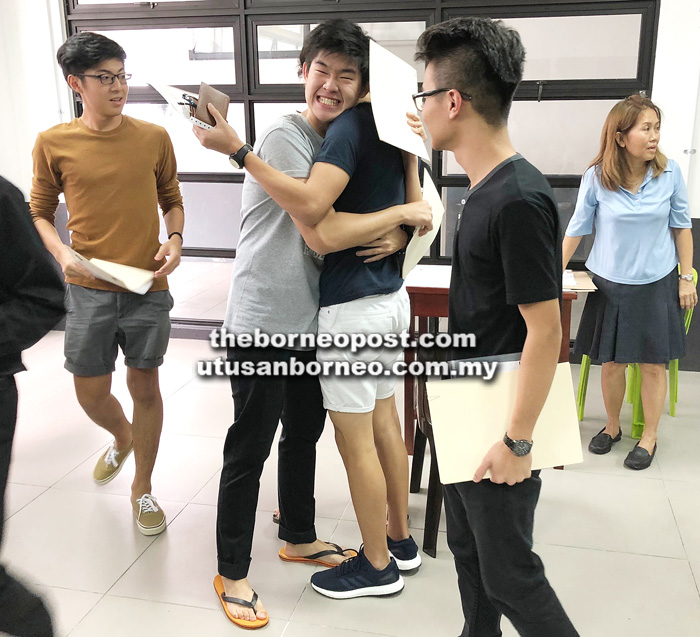 An ecstatic Marcus (second left) hugs Gordon after getting their SPM results.

However, the thought of straight A+s, did not cross their minds as their goal was to score the best they could.

In fact, the two students from St Joseph Private Secondary School actually concocted a back-up plan to take up Accounting as an extra subject in case they couldn’t score A+ in their weaker subjects.

“I heard from my friends that Accounting is an easy subject so I thought I’d give it a try. As my school is still new, Accounting wasn’t taught here, so since Form 4 Chie Liang and I went for tuition to study accounting,” an elated and overwhelmed Marcus told reporters when met after obtaining his results at the school on Thursday.

For Chie Liang, the decision to take up Accounting was due to his lack of confidence in scoring A+ in Bahasa Malaysia and Pendidikan Moral.

“I decided to take Accounting because my friend told me that this subject isn’t as hard as people made it out to be. I also took tuition in Biology, Bahasa Malaysia, Additional Mathematics and Chemistry.”

Asked what their plans are now that they have the world at their feet, both said they would be studying A Levels before deciding to pursue in the future.

“Right now, my plan is just to complete my A Levels because I’m still not sure about what I want and it’s probably best to just take it one step at a time,” said Marcus.

Chie Liang shared the same sentiment, stating that he looks forward to finishing his A Levels at Sunway College first.

Also taking A Level is Marcus and Chie Liang’s classmate Aloysius Pang Chun Kit who scored 9A+s in the SPM.

He shared his tips on revision where he focused on testing himself with past years exam papers.

“I purchased a lot of past years papers and I would solve each and every one of them to familiarise myself with the type of questions asked,” he said.

Currently studying his A Levels at Lodge International School, Aloysius aspires to pursue a career in psychology.

“I really want to understand how the human mind thinks and if I pursue this as a career, I hope to be able to help people especially when many are suffering from mental illness these days. If that doesn’t work out, I might take up teaching,” he said.

Another straight A+ scorer is Gordon Yong, who scored 10A+s, with Pendidikan Seni Visual (Visual Arts Education) as his extra subject.

“I love science a lot but at the same time, I feel like I have talent, passion and interest in arts so I just went for it,” he said.

He said since a very young age, he has always been interested in drawing and credited his mother Loretta Kho for being an inspiration.

“My mother loves art and she kind of cultivated the arts spirit in me. Just because I love science doesn’t mean I should drop my passion in arts and that’s why I took up both,” said Gordon, who hoped to study dentistry or architecture upon completing his A Levels.