Wednesday, March 3
You are at:Home»Features»Making UCTS a first choice university 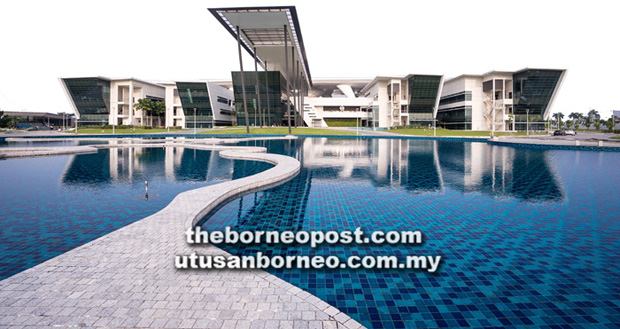 A front view of the state-of-art UCTS campus.

NEWLY-minted University College of Technology Sarawak (UCTS) vice-chancellor Prof Datuk Dr Khairuddin Abdul Hamid wants to take the academic institution to another level, including being accorded the status of a full-fledged university.

Khairuddin, who took over from Prof Datuk Dr Abdul Hakim Juri on Feb 1, also wants the state-owned university to be the first choice of Sarawak students for higher education.

“The first five years have seen the campus equipped with good infrastructure and state-of-art facilities. It’s very iconic and people are amazed at the majestically beautiful campus.

“These five years are the setting-up phase. We are now entering the second phase and it’s my job to elevate the university to another level in terms of recognition, acceptance, university of choice and branding, among others,” he told thesundaypost. 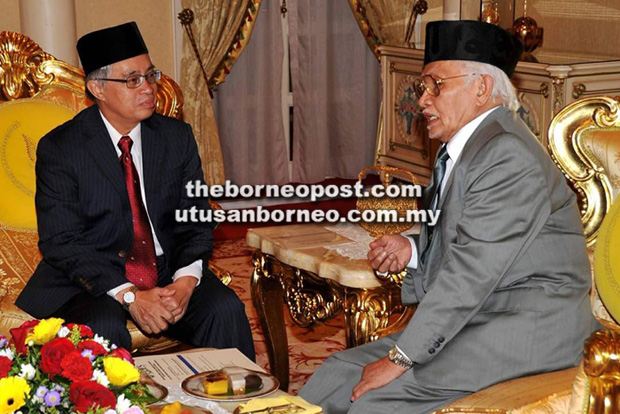 “UCTS will submit the proposal to Ministry of Higher Education this year for it to be elevated to full university status.

“The proposal will also include suggestions on names for the university, subject to the ministry’s approval. Furthermore, to become a full-fledged university in terms of criteria, I think we have the confidence because we have the necessary infrastructures — nice campus complete with all the facilities.”

“I think we have a very strong academic staff — a combination of senior professors as well as professors with PhDs and young lecturers.

“We have a full range of academic programmes from foundation all the way up to PhDs. That means all the criteria are already with us. And financially, we are strong because we have the support of the state government and the local industry. So, I think that should be enough for us to propose for a full-fledged university,” he added.

Khairuddin’s immediate concern is how to fill the state-of-art and green university with more intellectual and academic activities so that it is not just about beautiful buildings.

To move in that direction, he feels UCTS has to increase its student population, saying it would be nice to have over 3,000 students, from the current 1,800.

A glance at UCTS campus life.

“We are targeting China, Indonesia, Indo-China (Cambodia, Vietnam and Laos) and neighbouring Brunei. We don’t want to go too far as we are new.

“Hopefully, by doing that, the outlook of UCTS in the next couple of years will be different and become better known.”

“Otherwise, when people drive into the university, they may see a nice campus but it, somehow, lacks the excitement. So, I want to see more posters to make it more welcoming to visitors and give them a sense of belonging,” he explained.

Khairuddin is also working to get some of the university’s laboratories accredited.

“That means they will have a certificate — such as from Sirim — to carry out tests. Our labs will be certified and industries can come here (UCTS) to do certain tests.”

Vastly experienced in the field of education, he opined that as a new university, UCTS must create something unique for the public to recognise and remember.

“In the next couple of months, I will review with my colleagues on fine-tuning our academic programmes to give them a more international outlook. Perhaps, we will have some collaboration with international universities.

On the university’s academic programmes, he said they must have a purpose.

“For example, we are a technological university — we must balance the academic and theoretical content in addition to hands-on skills or be market-driven.

“So, my idea is when we design our academic programmes, not only must we prepare our students for their degree courses but do so as well with some value added. Perhaps, in their three or four years of study, we will allow the students to sit for some industrial certification or industrial licensing — like a chargeman, for instance.

“There are many industrial certifications available from the Construction Industry Development Board (CIDB), Sarawak Energy Bhd (SEB), or even IT companies.”

He added the intention is to add value to the academic programmes by introducing certification and industrial licensing so that students could set up their own companies after graduating.

Khairuddin said parents could save on costs if their children enrolled for further studies at UCTS.

He revealed their marketing team has been actively promoting the university to schools, even in the rural areas.

“We offer scholarships to eligible and deserving students. In addition to UCTS scholarships, there are some from private companies and Yayasan Sarawak. If there are any genuine cases, we will try to help,” he said.

“All in all, we now have about 20 programmes. This year, we are preparing for another 10 new programmes.

He said for the time being, the infrastructure at UCTS is sufficient, adding that the multi-storey 350-capacity car park has been completed.

“Both the car park and the surau, which can accommodate 500 people, will be ready for use this month. The new hostel, capable of housing 720 people, is expected ready by March 2019.”

Khairuddin believes five years after its inception, the time is right for UCTS to carry out research and development.

He expects 2018 to be a busy year for the staff in terms of research, either internally or in collaboration with industry players or government agencies, especially with the state government’s plans for the Sarawak Corridor of Renewable Energy (SCORE) and a digital economy.

Khairuddin said identifying niche research areas such as marine and shipbuilding technologies is in the pipeline and, for this purpose, the university would collaborate with the Shipyard Association in Sibu.

UCTS, which has a drone lab, is also collaborating with its Taiwanese partners (university and industry) on drone technology.

“We can use drones for many applications, especially in agriculture and maritime,” he said.

He also disclosed they were evaluating how to use their expertise for architectural conservation and heritage, noting that some of the staff were doing a bit of work in this area around Kuching and Sibu.

“I think we are the only architecture school in Sarawak with accreditation from the Board of Architects Malaysia,” he said, adding that UCTS is looking into using digital technology to help especially the rural communities.

To Khairuddin, the challenge is not many people actually know UCTS is a state-owned university.

He said there were those who believed UCTS belongs to some individuals or a group of people.

“It’s actually a state-owned university but operates as a private university. We support the state’s effort to produce the manpower for further development in Sarawak, especially with regard to SCORE, digital economy as well as oil and gas, among others.

“Therefore, it’s high time UCTS is promoted as a state-owned university. This fact had not publicised previously.”

Khairuddin believes parents would have more confidence in UCTS when it is accorded university status. 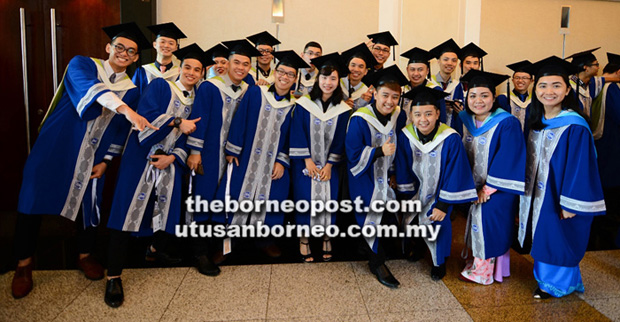 UCTS graduates at their convocation.

He said UCTS wants to be more financially self-sustaining to not be overly dependent on state government assistance.

“UCTS needs a long-term plan on generating more revenue. This can be done by providing training, consultancy, contract research, commercialisation of research products and even offering specialised programmes to government agencies. The labs can also be rented out.”

Khairuddin said the university is working with the state government to set up a UCTS Science and Technology Park beside the campus, adding that a proposal for such a project had been put up.

“We will also try to provide sports facilities for the students. Besides, education can be made part of the initiative to promote tourism through collaboration with the local authority.

“I hope having this university well recognised will contribute to the growth of Sibu, catering to not only the needs of the younger generation but also making the place better to work and live in.”

He said being good does not necessarily mean a university has to be big, pointing out that the important thing is to be good in what one does.

“One of my dreams is to make UCTS a full-fledged university. One day, the name of this university will become synonymous with Sibu. And when people mention Sibu, they will know this university is here,” he said.

In addition to that, he was also presented with a number of national and international awards for his contributions to university leadership, research and pioneering community-based projects related to rural ICT as well as bridging the digital divide, in particular, the e-Bario Project.

Last year, he was one of the finalists for the ICT Educator of the Year Award, organised by Southeast Asia Regional Computer Confederation (SEARCC) in Sydney, Australia.

Recently, he was appointed a member of the Yayasan Felda board of trustees and chairman of the Technical Committee for the Establishment of Board of Computing Professional Malaysia (BCPM) under the Ministry of Communication and Multimedia.

He started his career as an academic staff member in the Faculty of Electrical Engineering, UTM, in Kuala Lumpur, from 1982 to 1993.

He later joined Unimas as one of the pioneer staff members when the university was established in 1993. He held various academic and administrative posts besides being a professor and researcher at Unimas.

Khairuddin is recognised internationally through his professional and research collaborations.

In 1993, he was a research fellow at East West Centre, Hawaii, and in 1998, a visiting professor at Global Information and Telecommunication Institute (GITI), Waseda University, Tokyo, for six months.

He also chaired the Working Group on Policy, Regulations and Special Projects under the Asian Info-communications Council (AIC) from 2001 to 2008, and is currently an appointed expert consultant for the Telecommunications Technology Committee (TTC) of Japan to carry out rural ICT projects in Asean countries.