Wednesday, September 23
You are at:Home»News»Sarawak»Fatimah confident state BN can win with big majority in GE14 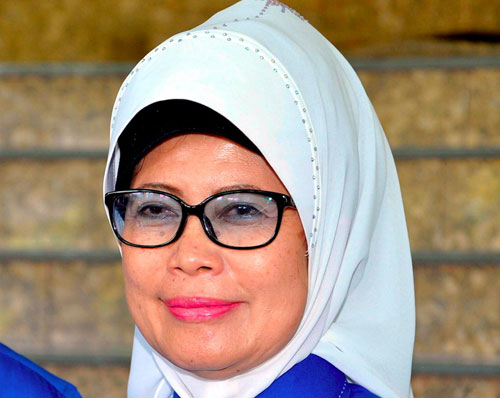 MIRI: Parti Pesaka Bumiputera Bersatu (PBB) Women wing is confident that the state BN will secure a big majority in the 14th general election (GE14), considering that all of its component parties are ready to face the opposition.

Another reason for this confidence, said its chief Dato Sri Fatimah Abdullah, is that all women elected representatives in the state were hardworking and ever-ready to serve the people.

“I am confident that with their good track record, all the women representatives in the State Legislative Assembly and Parliament will be able to win the hearts of the people of Sarawak,” she told the press yesterday.

Furthermore, the good cooperation between the PBB Women wing and other BN component parties will enable the state BN to wrest some seats from the opposition, she added.

She also said that PBB Women wing had gone to the ground to meet its grassroots leaders and members.

As an example, Fatimah said she was with PBB women in Mukah the day before and would be meeting PBB women from sub-branches in Miri, Sibuti and Lambir yesterday to ensure that they get their election machinery ready for the election.

Currently, there are four women MPs from PBB.