Monday, August 15
You are at:Home»World»Two injured in mysterious Texas bombing, fourth in a month 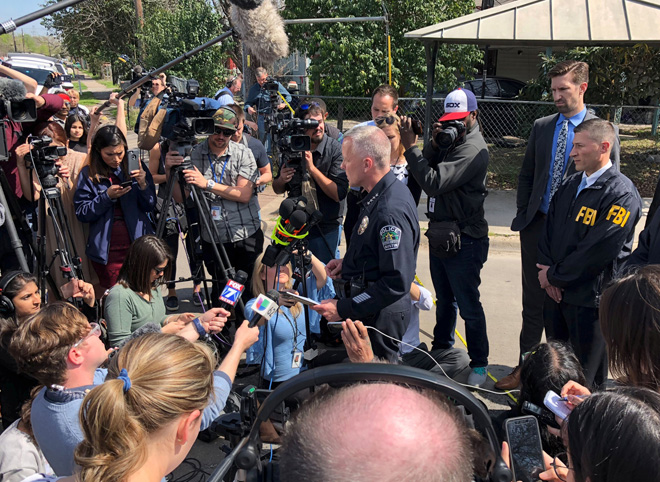 Manley speaks to media at a news conference in Austin, Texas after the bombing on March 12. — Reuters photo

CHICAGO: Two people were injured in an explosion at a home in Austin, Texas, the fourth mysterious bombing in the city this month, police said.

The blast came just hours after police made a direct public appeal to the unknown bomber or bombers suspected of leaving packages that exploded and killed a 39 year-old man on March 2, and two explosive packages on March 12, including one that killed a 17 year-old man.

The county Emergency Medical Service said on Twitter that they responded to reports of an explosion around 8.30pm (0130 GMT Monday), and two men in their 20s were rushed to a hospital with serious injuries.

Authorities were investigating the previous bombings as possible hate crimes as the two men killed were African-American, and a Hispanic woman was seriously injured. Police did not mention the race of the victims.

“Stay inside your home until we have had a chance to deem this neighbourhood safe,” Austin interim Police Chief Brian Manley said at a news conference after the blast.

“That will not be, at a minimum until daylight, given the darkness and the size of the area that we want to go in and check to make sure again that this neighbourhood is safe.”

Because of the darkness “we have not really had an opportunity to really look at this blast site to determine what has happened,” Manley said.

Police believe the earlier attacks were related. All of the cardboard packages were hand-delivered, not sent through the mail, and the bombs were built with household items available at hardware stores.

The Austin-American Statesman reported that Manley said the explosive was possibly triggered by a trip-wire, unlike the previous bombs. He also said investigators are operating under the assumption that the attack is connected to the three prior blasts. A task force of hundreds of agents is working on the case, including criminal profilers and experts from the Federal Bureau of Investigation (FBI) and the Bureau of Alcohol Tobacco and Firearms (ATF).

At an press conference, Manley addressed the unknown bomber or bombers directly.

“We want to understand what brought you to this point, and we want to listen to you,” he said.

Police also said they were increasing the reward offered for information leading to an arrest, bringing the total city and state bounty money to US$115,000. — AFP