Monday, August 15
You are at:Home»Business»Vietjet announces plans to connect Vietnam to the land down under 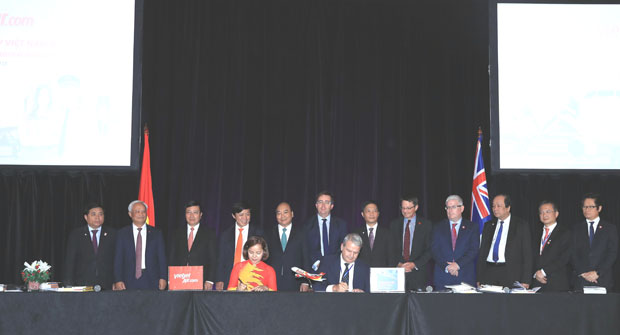 KUCHING: Vietjet is set to make Brisbane its first Australian long haul destination following the signing of a Memorandum of Understanding (MoU) between the airline and Brisbane Airport Corporation (BAC), Queensland, Australia.

Scheduled to commence in 2019, the non-stop service between Ho Chi Minh City and Brisbane is expected to boost trade integration and exchange, a move that will greatly serve the interests of the region.

The signing ceremony which took place in Sydney was witnessed by Vietnam Prime Minister Nguyen Xuan Phuc and other senior leaders of Vietnam and Australia. During which, Vietjet also signed a MoU worth US$609 million with Investec Bank PLC to finance the purchase of five Airbus A321 aircraft at manufacturers’ list price.

BAC chief executive officer (CEO) and managing director Julieanne Alroe said travel between Queensland and Vietnam has been growing at an average eight per cent per annum over the last five years and this new service would further stimulate the market.

“It makes perfect sense for Vietjet to choose Brisbane, Queensland as its very first Australian port for direct flights given Ho Chi Minh City is one of Brisbane’s top five markets without non-stop services.

“We look forward to welcoming Vietjet to the Brisbane Airport family and further strengthening the ties between Queensland and Vietnam,” she said.

“This new route addition presents us with an opportunity to better serve the demands of travelers in Vietnam and the region,” Nguyen said.

“We are proud to be the pioneer airline to operate direct services from Vietnam to Brisbane, a dynamic business centre that boasts friendly people, pleasant weather and living conditions that is very attractive for international travelers.”

Located in Southeast Australia, Brisbane – the capital of the Sunshine State, boasts a population of over two million people, making it the third-largest city in Australia. Brisbane’s year-round idyllic subtropical weather, award-winning food and wine, adventurous activities and spectacular scenery has been a major draw-card for many domestic and international travelers, especially those from the Asia Pacific region, including Vietnam.