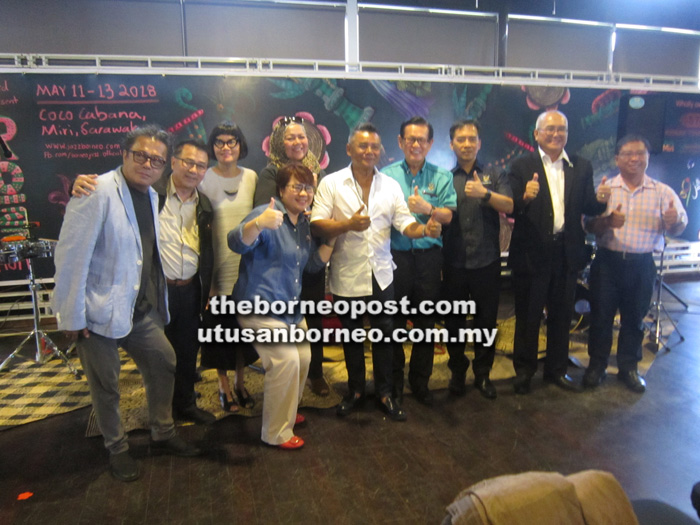 Lee (fourth right) with Hii (third left), Zainal (fifth right) and others at the launching ceremony for Borneo Jazz Festival 2018.

MIRI: Sarawak Tourism Board (STB) is embarking on a new model for the 13th Borneo Jazz Festival this year.

The board is co-presenting this year’s edition, to be held at Coco Cabana in Marina Bay from May 11 to 13, with No Black Tie – Kuala Lumpur’s premier jazz club.

“I believe we have many young promising musicians in Borneo, and this platform has been developed specially to help nurture our young talents. Some of them will even be performing alongside international artistes during the festival,” he said at the launch of Borneo Jazz Festival 2018 here yesterday.

Abdul Karim said No Black Tie has played host to leading jazz names from both the region and internationally for the past 20 years, adding that he was pleasantly surprised to learn that the proprietor, Evelyn Hii, hails from Miri.

“I believe this partnership (between STB and No Black Tie) will help the festival to grow even bigger and better in the years to come.”

He said Borneo Jazz Festival has rightly earned its reputation as a noteworthy regional event after 13 years, drawing thousands of visitors every year.

The event, he added, has put Sarawak on the map while also supporting local talent and businesses.

“We look forward to welcoming jazz fans from near and far to experience the musical arts of Sarawak.”

Hii, who is festival director, said the first-ever Borneo Jazz Talent Search, which kicked off earlier this month, gives young and emerging talents from Borneo the chance to perform in front of an international audience.

“With the influx of visitors from near and far, the festival is an amazing opportunity for exposure, while also providing a dynamic platform for dialogue and cultural exchange between East and West.

“As advocates for Malaysia’s music  scene, No Black Tie is proud to introduce this educational effort which supports local talents,” she said.