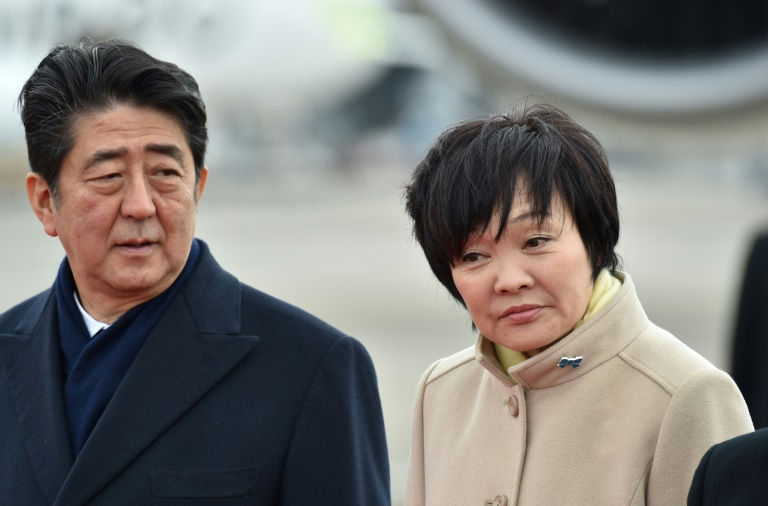 TOKYO: Japan’s First Lady Akie Abe is a freewheeling, flamenco-dancing socialite who once described herself as the “opposition” to husband Shinzo and is now embroiled in a scandal that threatens his career.

The 55-year-old scion of a major confectionery firm has been thrust into the spotlight amid a favouritism and cover-up affair that has battered the prime minister’s popularity.
Japan’s emboldened opposition parties have called for Akie Abe to appear in parliament to explain her links with a nationalist school operator at the centre of the cronyism scandal.

The operator, who at one point named her the honorary principal of his new school, snapped up state-owned land at a price well below market value, with the opposition claiming his ties to the Abe family helped grease the deal.

The scandal flared further when it emerged that finance ministry documents regarding sale had been altered, including deleting her name.

The attention is probably not what Akie Abe expected when she vowed to raise the profile of the prime minister’s wife following a series of predecessors who shunned the limelight.

While Abe fends off political pressure to resign, his wife has continued her active presence on social media, posting images and comments on her Instagram and Facebook accounts.

Her social media activity once landed her in hot water when she stunned followers by posting an image of a shirtless man with the word “Akie” and an arrow mark written on his chest. The post was quickly deleted.

Politically speaking, Abe benefits from a relatively weak opposition. But this is apparently not the case at home, with Akie once describing herself as the “opposition camp in the family”.

She has frequently acted in opposition to her husband’s policies, openly supporting an anti-nuclear campaign as the government bids to get reactors back in operation following years of shutdown due to the 2011 Fukushima nuclear crisis.

Her husband has been forced to stay away from the shrine after running into fierce criticism from war-time adversaries China and South Korea after visiting it in 2013.

In 2016, she also made a controversial visit to Pearl Harbor, bombed by Japanese planes in an attack that brought the United States into World War II, months before her husband made a historic visit with President Barack Obama.

When Shinzo Abe first took office in 2006, his wife, a fan of Korean culture, was seen as a political asset for her husband by softening his hawkish image.

But some pundits have now labelled her “Abenorisk” — a pun on “Abenomics,” her husband’s economic policy — as the scandal dents Abe’s hopes of winning re-election as head of his ruling party in September.

“At first, her liberal image was expected to help balance Abe’s conservatism, but she was too freewheeling,” said Tomoaki Iwai, professor of Japanese politics at Nihon University.

“She has little awareness of the political significance of her position, while Prime Minister Abe appears to have lost control of her,” Iwai told AFP.

“In total her presence is negative to the administration,” he added.

Born Akie Matsuzaki, her father was president of Morinaga and Co., one of Japan’s best known confectionery companies.

She studied at a Roman Catholic school and worked for Japan’s leading advertising firm Dentsu before meeting Shinzo Abe and marrying him in 1987. The couple has no children.

Akie has professed a love for South Korean culture and is known to be a fan of the neighbouring country’s heart-throb Bae Yong-Jun, a baby-faced soap opera star.

While Abe is teetotal, Akie is known to enjoy an occasional drink. In 2012, she opened a Japanese-style pub serving organic vegetables.

She also studies flamenco dancing, a talent she has shown off for the cameras.

On March 17, she attended an social event as a guest speaker, reportedly telling the audience: “Sometimes I regret my past but I want to value present time without worrying or fearing what will happen.” – AFP

Previous ArticleChina unveils list of potential retaliatory tariffs on US goods
Next Article Indonesians, including army personnel, caught by police for various offences