Saturday, August 15
You are at:Home»News»Sarawak»State launches ‘The Colours of Sarawak’ 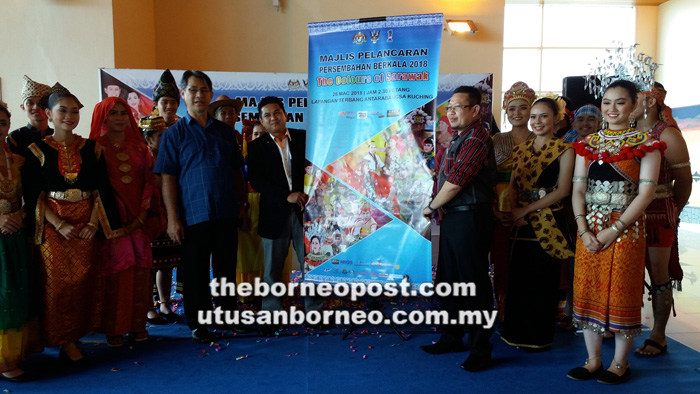 Abdul Mutalib (fourth right) unveils the ‘The Colours of Sarawak’ banner with Malaisamsul (fifth right) at the KIA yesterday.

KUCHING: A cultural performance called the ‘The Colours of Sarawak’ was officially launched at the Kuching International Airport (KIA) yesterday.

Headed by the National Department of Culture and Arts (JKKN) Sarawak, the performance will be held on selected dates throughout the year as a platform to further promote the state’s tourism industry.

According to JKKN state director Abdul Mutalib Abdul Rahman, there is no better place to showcase the uniqueness of Sarawak other than KIA, which is the main gateway to the state.

“We have 27 main ethnic groups in Sarawak. Added with the diversity of all its sub-ethnic groups, there is a lot of variations that we can show to the world,” said Mutalib during the launch of the show.

The variety of dances, songs of these ethnic groups, he added, is what makes Sarawak unique and an attraction to visitors. He revealed that last year, the state recorded about 4.8 million visitor arrivals, with more than 800,000 visitors arriving and departing via KIA.

‘This is why JKKN is very keen to organise this dance and song performance together with KIA and Malaysia Airports Holding Berhad (MAHB),” he added.

Also speaking was MAHB aviation security manager Malaisamsul Sabdin, who said the concert is part of MAHB’s corporate social responsibility which brings joy and improve the ambience at the airport.

One of the cultural performances attracts a large crowd at the KIA yesterday.

Previous ArticleOCPD calls on public to remain as the ‘eyes and ears’ of police
Next Article Strong bond with community sees big drop in crime, says Miri OCPD