Wednesday, December 8
You are at:Home»News»Sarawak»‘1,270 addicts sought treatment since 2016’ 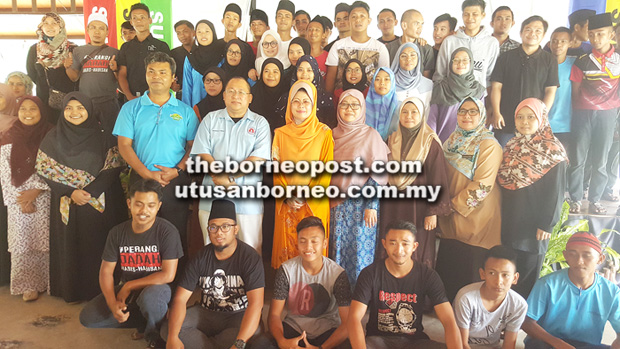 Fatimah (standing front row, fifth right) with camp facilitators and participants in a photo-call at the closing of the camp.

KUCHING: Some 1,270 drug abusers across the state have sought treatment at National Anti-Drug Agency’s (AADK) rehabilitation centres since 2016 to overcome their addiction.

Minister of Welfare, Community Well Being, Women, Family and Childhood Development Dato Sri Fatimah Abdullah said the figure consisted of those who voluntarily turned themselves in at AADK’s Cure and Care Rehabilitation Centre.

“These individuals need help and they should not be left out by society. They should instead be assisted to help them overcome their drug abuse problem,” she said during the closing of AADK’s ‘Eksplorasi Minda and Bestari’ camp at Sumiran Eco Farm, here yesterday.

The annual camp has been jointly organised by AADK Kuching and the Education Service Bureau of the State Islamic Council (Mais) since 2016.

Fatimah said collaboration between various agencies is another way to combat drug abuse as each agency has its own strength to complement each other.

“Initiatives such as this camp are great ways to reach out to those who slip into such (drug abuse) problem,” she added.

She also urged ADDK to highlight success stories of individuals who overcame their drug addiction to the general public, as it could serve to motivate those with similar problems to seek help.

Meanwhile, Fatimah, who is Parti Pesaka Bumiputera Bersatu (PBB) Women chief, told reporters at the event that there are ‘several’ potential women candidates from the party for the coming general election.

“However, only Prime Minister Datuk Seri Najib Tun Razak as the Barisan Nasional chairman has the final say, and we will have to wait for his final announcement of the candidates,” she added.

AADK Sarawak treatment and rehabilitation unit assistant director Iskandar Turkee and AADK Kuching head Sharifah Azimah Said Ismail were among those present at the closing of the camp.