Friday, December 4
You are at:Home»World»China slaps retaliatory tariffs on 128 US imports 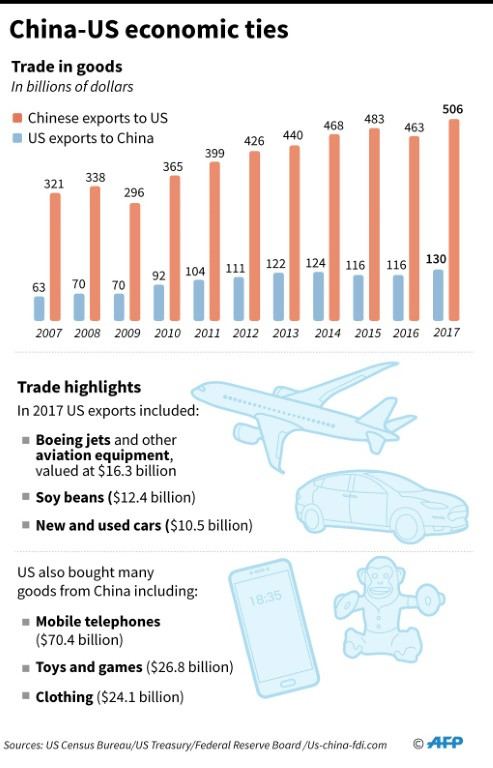 BEIJING: China on Monday imposed tariffs on 128 US imports worth $3 billion, including fruits and pork, retaliating for US duties on steel and aluminium that Beijing said “seriously infringed” Chinese interests.

China’s move, which the Xinhua news agency said was decided by the custom tariffs commission of the State Council, followed weeks of rhetoric that has raised fears of a trade war between the world’s two biggest economies.
The Trump administration had said its duties were aimed at steel and aluminium imports that it deemed a threat to US national security, but China’s Commerce Ministry on Monday called that reasoning an “abuse” of World Trade Organization (WTO) guidelines.

The US measures “are directed only at a few countries, seriously violating the principle of non-discrimination as a cornerstone of the multilateral trading system, which seriously infringed the interests of the Chinese side,” said a statement on the Commerce Ministry website.

President Donald Trump has repeatedly railed against China’s massive trade surplus with the United States and promised during the US election campaign to take steps to slash the US deficit.

Beijing had warned last month that it was considering the tariffs of 15 percent and 25 percent on a range of products that also include wine, nuts and aluminium scrap. They came into force on Monday, Xinhua said, citing a government statement.

The levies are in response to tariffs of 10 percent on aluminium and 25 percent on steel that have also angered US allies.

“We hope that the United States can withdraw measures that violate WTO rules as soon as possible to put trade in the relevant products between China and the US back on a normal track,” the Commerce Ministry statement said.

“Cooperation between China and the United States, the world’s two largest economies, is the only correct choice.”
Trump has temporarily suspended the tariffs for the European Union as well as Argentina, Australia, Brazil, Canada, Mexico and South Korea.

But the White House has unveiled plans to impose new tariffs on some $60 billion of Chinese imports over the “theft” of intellectual property.

China has called on the United States to stop its “economic intimidation” and had warned that it was ready to hit back.

But Beijing has so far held fire against major US imports such as soybeans or Boeing aircraft — items that state-run daily the Global Times suggested should be targeted.

The nationalistic newspaper said in an editorial last week that China has “nearly completed its list of retaliatory tariffs on US products and will release it soon.”

“The list will involve major Chinese imports from the US,” the newspaper wrote, without saying which items were included.

“This will deal a heavy blow to Washington that aggressively wields the stick of trade war and will make the US pay a price for its radical trade policy toward China,” the Global Times wrote.

Despite the rhetoric, US Commerce Secretary Wilbur Ross on Thursday suggested the new measures on intellectual property were a “prelude to a set of negotiations”.