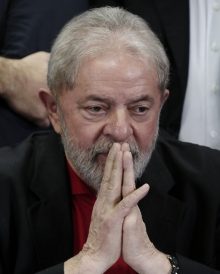 BRASÍLIA: Former Brazilian president Luiz Inacio Lula da Silva was on the verge of going to prison Thursday after the Supreme Court rejected his bid to delay a 12 year sentence for corruption in a ruling that split the country and upended this year’s election.

Following the court’s narrow decision against allowing Lula to remain free pending new appeals, it was expected that Brazil’s chief anti-corruption judge, Sergio Moro, would soon issue an order for the two-term former president to be incarcerated.

It remained unclear exactly when this would take place. But legal experts said it would be no more than a few days away, possibly early next week.

The 11 judges deliberated for more than 10 hours from Wednesday into Thursday on Lula’s request to avoid going to prison while he mounts fresh appeals. At 5-5, it was court president Carmen Lucia who cast the tie-breaker, saying that postponing serving of sentences “could lead to impunity.”

Broadcast live on television, the drama left Brazilians as divided as the judges themselves, and raised questions over the state of the country’s democracy after the top army general appeared to urge prison for the 72-year-old founder of the leftist Workers’ Party.

On the right, Lula is considered the face of corruption sweeping the country’s political elite. His imprisonment has long been the goal of prosecutors running Brazil’s ‘Car Wash’ anti-graft investigation and he is now their biggest scalp.

Leftists, however, remember Lula’s 2003-2010 rule as a time when Brazil used its wealth to lift tens of millions of people out of poverty.

For them, the entire corruption case is a sham cooked up by a judiciary giving major political figures accused of corruption on the right – including current President Michel Temer – an easier ride.

“A sad day for democracy and for Brazil,” Gleisi Hoffmann, who heads the Workers’ Party, tweeted.

The court battle mirrored the increasingly polarized election campaign in which a hard-right former army officer, Jair Bolsonaro, is currently second in the polls behind Lula, with centrists struggling to make ground.

The Supreme Court’s deliberations on the sensitive case took place under extraordinary social and political pressure.

More than 5,000 judges and prosecutors sent the Supreme Court a petition for Lula to be imprisoned immediately and justices have received thousands of emails on the subject.

At the same time, the court had to contend with the fact that Lula remains enormously popular with much of the population, especially in the poorer northeast. Sending Lula to prison could fatally cripple his election hopes, even if it is another court, the Superior Electoral Tribunal, that will rule on whether he can be on the ballot.

The Workers’ Party tweeted that “the Brazilian people have a right to vote for Lula” and promised to take its fight to “the streets… right to the bitter end.”

“This is a farce, it’s a huge blow. I can’t accept Lula out of the election,” said Lula backer Maria Lucia Minoto Silva, a 60-year-old history teacher, in Sao Paulo.

“I can’t accept an innocent man being in prison.” — AFP