Sunday, September 20
You are at:Home»News»Sarawak»Ministry to tighten carriers’ criteria 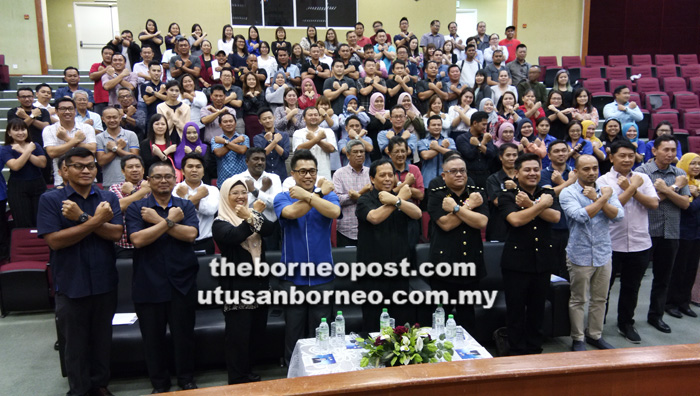 (From fourth left) Tan, Jamil, and Zulhairy are seen during a photo call at the event.

MIRI: The Ministry of Domestic Trade, Co-operatives and Consumerism will tighten its selection criteria for transporters programme contractors.

Its secretary-general Datuk Seri Jamil Salleh said this is to ensure only genuinely qualified and eligible contractors are awarded contracts so the people do not receive poor quality service.

“We are serious and concerned about this, because (when there is problem) I am the one who will have to answer to the audit (department) and MACC (Malaysian Anti-Corruption Commission), not the transporters,” he said at the presentation of transporters’ contracts and corruption-free pledge ceremony here on Wednesday.

Jamil said improvements are necessary to avoid problems such as insufficient goods, goods being sent to the wrong location, or transporters not following the rules.

“I know all these problems continued to happen last year. As a transporter, there are rules to be followed, yet we received complaints from various parties. Because of this, even our director’s name was called out during an investigation by MACC, even though our director did not get anything from the transporters.

“But, MACC had to conduct a thorough investigation on the movements of our transporters in Sarawak and we had to answer to the audit (department). Our officers, who were not directly involved in transportation of the goods, were also investigated.

“So this year, I want all transporters to follow the rules strictly. All supplies and goods must be transported according to the quantity set by the ministry and must reach the correct destination,” he said.

He warned transporters who fail to abide by the terms and conditions of their contracts would be immediately terminated.

“This is a warning to all transporters, who do not perform according to the terms and conditions of their contracts. I will not hesitate to terminate their contracts immediately.

“The ministry will not compromise on this, because if we do not terminate their contracts, our own officers will be ‘terminated’. I don’t want my officers to be terminated due to transporters not following the rules,” he said.

Jamil also said those awarded contracts must be registered with e-Perolehan within the next six months.

“If all the rules are followed, I promise that we will renew their service by the end of this year. If not, we will blacklist them.

“If they are not able to commit, please let us know so that we can terminate their contract immediately,” he said.

Jamil said the government spends around RM100 million a year for the transporters programme in Sarawak alone.

“The government’s mission to enable those in the rural areas to obtain goods and daily essentials with prices similar to those in the city will not be achieved if the programme fails,” he said.

The government subsidises transportation costs through the transporters programme to reduce the price of goods in rural areas.