Saturday, January 29
You are at:Home»News»Sarawak»State to modernise agriculture 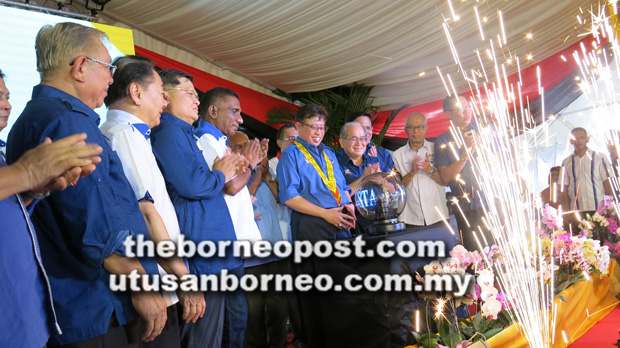 He noted that new technologies to be adopted in the development of agriculture sector would be based on technological production method such as fertigation system and artificial reproduction technology.

“As agriculture is still one of our main economic strengths, we need to change to modern technology not only to increase but also to improve the quality of production apart from facilitating access to domestic and international markets,” he said when officiating at the launching ceremony of National Blue Ocean Strategy (NBOS) Fiesta here yesterday.

An agro-park involving an area of 600 acres had been proposed as a model to spearhead migration towards modern and digital agriculture in Sarikei Division, an integral part of the state’s food basket which also covers Betong Division.

According to Abang Johari, a sum of RM200 million had been set aside as venture capital for the development of Sarikei Agro-Park, adding, its participants would preferably be from among youths with good ICT knowledge background.

He revealed that one of the markets would be Singapore as the matter had been discussed with the Republic’s government when he led a group of Sarawak officials to visit the Island City State recently during which it was decided to set up Sarawak Office in Singapore next year.

In that respect they would seek the advice from Bank Negara on how to facilitate transactions between SarawakPay and Singaporenet.

Touching on the general development plan for Sarawak, Abang Johari said he hoped to see all planned infrastructure facilities, utilities to be delivered in the next six years.

Citing an example, he pointed to the implementation of State Water Grid to ensure all households enjoy treated water in the next six years, adding, the project was estimated to cost about RM8 billion.

Abang Johari also wanted to see the coastal road highway project to be linked up within the next six years and hoped the proposed Batang Lupar Bridge would be realised with the federal and state governments both pledging RM500 million each towards its cost apart from Sebuyau and Batang Lasa bridges.

He announced an allocation of RM100 million to set up Wisma Sarikei as the Division’s administrative office and another RM11 million for Taman Susur Jambu Village Extension programme.

Abang Johari added that to provide quality telecommunication and internet services, the state government had allocated RM1 billion while the federal government added another half billion ringgit.