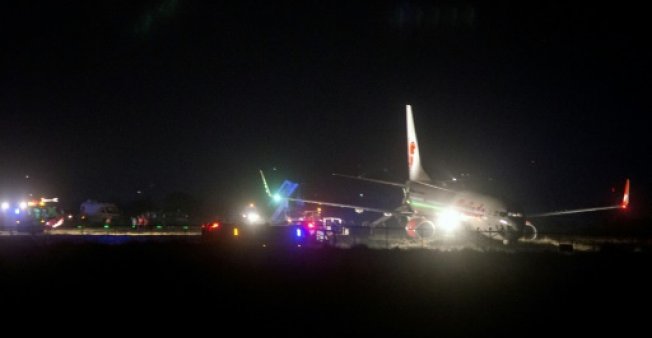 The Malaysian jet was speeding down the Tribhuvan International Airport runway when the pilots detected a problem and aborted takeoff, a spokesman for Nepal’s only international airport says. AFP photo

KATHMANDU: A Malaysian jet carrying 139 people that aborted its takeoff and skidded into mud forced Kathmandu airport to shut down for more than 12 hours until the plane was moved Friday.

Nobody was hurt in the incident but hundreds of passengers had flights cancelled and all incoming flights were diverted after the Malindo Airlines Boeing 737 went off the runway late Thursday.

The jet was speeding down the Tribhuvan International Airport runway when the pilots detected a problem and aborted takeoff, airport spokesman Prem Nath Thakur said.

The jet skidded into grass and came to a halt in mud about 100 feet (30 metres) from the runway.

“All aboard are safe,” Thakur said, adding that the cause of the problem was not immediately known.

Nepal’s only international airport reopened again just before midday Friday after the jet was “removed without any damage,” Thakur added.

American traveller Sarah Ann Loreth, heading to Doha before returning to her home in Boston, spent hours on her jet after the emergency.

“We were supposed to take off on Thursday but couldn?t because of the Malaysia flight,” she told AFP.

“Around 2:00 am the flight attendant informed us the other flight had slipped off the runway and was stuck in the mud and could not be moved.

“They deplaned us around 2:30 am and it was pure chaos. We went back to the terminal and they had our bags laid out behind the counter and we just went behind and grabbed them.”

Cars eventually took the passengers to hotels to wait for a reorganised flight, Loreth said.

The incident came one month after the crash of a US-Bangla Airways plane at Kathmandu airport, which killed 51 people.

In March 2015, a Turkish Airlines jet skidded off the runway as it landed, forcing Tribhuvan Airport to close for four days.

The Himalayan nation has some of the world’s most remote and tricky runways, flanked by snow-capped peaks with approaches that pose a challenge even for accomplished pilots.

Nepal has a poor air safety record. Accidents are common and Nepal-based airlines are banned from flying in European Union airspace. – AFP