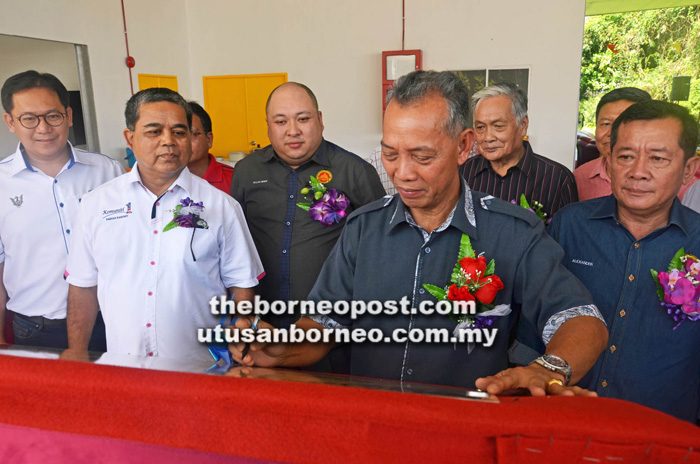 Penguang (second right) signs the plaque to declare open the new market as (from right) Alexander, Angki, Allan, Aaron and others look on.

KANOWIT: Kanowit incumbent Datuk Aaron Ago Dagang believes that Barisan Nasional (BN) will triumph again in Kanowit and the state in this election.

He said this was based on the previous Sarawak state election results where BN won 72 out of 82 seats in the state.

“There are no hot issues that can be monopolised by the opposition this time.  There is local issue like the native customary rights (NCR) land but this issue has been taken into account by the government and I believe it will not affect support for BN,” he said during the official opening of a new Kanowit multipurpose market at Banglo Road here yesterday.

Earlier, Aaron called on the people to remember the good things that the government had done for them when casting their votes.

He said one of the most significant developments in Kanowit is the road that connects Kanowit to Sibu and Kapit that not only provides accessibility but will also open up opportunities to the people there to uplift their economy.

Penguang, who spoke later, said Aaron and BN would not face any problem in winning the Kanowit seat.

“I know the community leaders here are strong supporters of BN although there may be one or two who criticise the government,” he said.

He advised the constituents not to gamble their future and not to believe any allegations against the government as well as to filter any information that come to them.

Allan and Alexander in their speeches also called on the voters here to support BN.

Aaron has been Kanowit MP for three terms after first winning the seat for BN in the 2004 general election with a majority of 2,057 votes over independent candidate Frederick Bunsu Janton in a straight fight.

He won the seat uncontested in 2008 and retained it in 2013 by defeating Thomas Laja Besi of Parti Keadilan Rakyat and Ellison Ludan Muyan of Sarawak Workers Party by 3,042 votes.