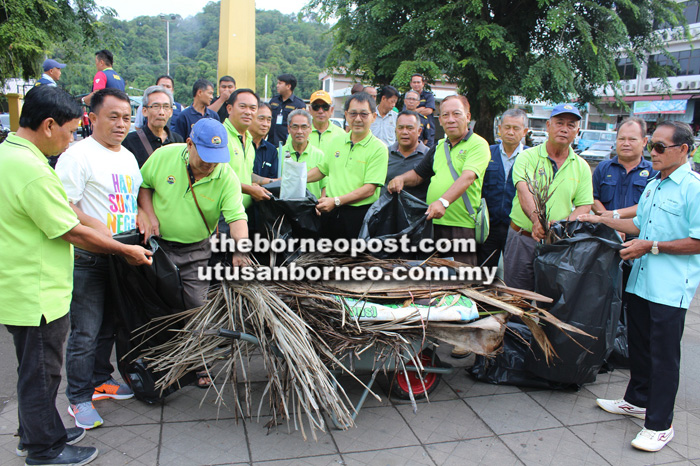 Philimon (centre) together with councillors and KDC staff during the anti-litter campaign.

Walikota Philimon Nuing said the council has been putting up signs and notices warning the public not to litter as well as holding talks on the subject.

“Despite such actions, our efforts seem to have little impact as we can see public places like Kapit Town Square, the riverfront areas and the streets are still strewn with rubbish.

“Our greatest challenge is to change the mentality and mindset of the people. Perhaps education alone is insufficient without penalising the culprits and for this purpose, we have initiated compounding action in accordance with the Local Authorities (Cleanliness) By-Laws 1999 and the Local Authorities (Compounding Of Offences) By-Laws 1999,” he said when launching the campaign at Kapit Town Square here yesterday.

“No doubt the council hires private contractors to carry out sweeping and cleaning of streets, cleaning and clearing of drains and rubbish collection, but the people should have the courtesy to throw their garbage and litter into rubbish bins provided at public places rather than on the streets.”

He said KDC will be putting up banners of its compounding action and the penalty for littering, adding also that council enforcement officers will be stationed at public places to catch and compound litterbugs on the spot. Deputy Walikota Lawrence Listing Baling was among those present with Philimon at the campaign launch.