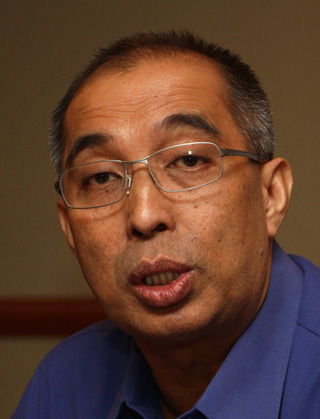 KOTA KINABALU: Communications and Multimedia Minister Datuk Seri Dr Salleh Said Keruak today expressed confidence that the majority of the people of Sabah would remain with the Barisan Nasional in the 14th general election.

The UMNO treasurer said the people had witnessed the commitment and efforts of the BN in bringing development to Sabah for the well-being of the people.

“Yesterday, we revealed the BN additional manifesto for Sabah which gives the assurance of continued development in Sabah, and I am sure the people will be with the BN,” he said to reporters after being named as the BN candidate for the Kota Belud parliamentary seat in GE14 here.

Salleh, who last held the Usukan state seat, will contest Kota Belud which he has held before.

He thanked the party leadership for having placed their trust in him and having selected him to contest the seat.

“We will work hard to ensure that BN retains the Kota Belud seat.

“We will explain to the people why it is important for us to ensure stability and continuity of development in the state and country,” he said.

In GE13, in 2013, Datuk Seri Abdul Rahman Dahlan won the Kota Belud seat for the BN with a majority of 5,095 votes. Abdul Rahman is contesting the Sepanggar parliamentary seat in GE14. – Bernama