The winners pose for a photo with the organising committee members.

BINTULU: Daud Ahmad from Tanjung Manis emerged champion in the Bintulu Open Fishing Competition 2018 after he landed a canal-type fish locally known as ‘Terusan’ weighing 1.94 kilogrammes. He bagged the grand prize of RM10,000 and fishing tackles.

Mohidi Omar won  third place after he caught a canal-type fish weighing  879 grammes and  walked away with RM1,000  and fishing tackles.

The contest, which was held from 8.30am to 3pm at Bintulu Promenade Waterfront on Sunday, was organised by Bintulu Melanau Association (PMB) in conjunction with its 40th anniversary.

Those placing sixth to 10th  received RM100  each while  11th to 25th placed winners received RM50 each.

Also present were Temenggong Rosli Kamaruddin who is PMB advisor, PMB deputy chairman Kederi Junaidi and PMB vice chairman Penghulu Morshidi Tali. Azman, who spoke at the event, congratulated the organiser for successfully holding the event which received overwhelming response from local anglers including those from Brunei and Indonesia.

Earlier, PMB chairman Shamsuddin Abdul Razak said the competition was participated by 305 anglers from throughout Sarawak and neighbouring countries.

“I am so happy with the encouraging response from our local anglers in this competition including our friends from Brunei and Indonesia and this is indeed a meaningful event to mark our 40th anniversary,” he added. 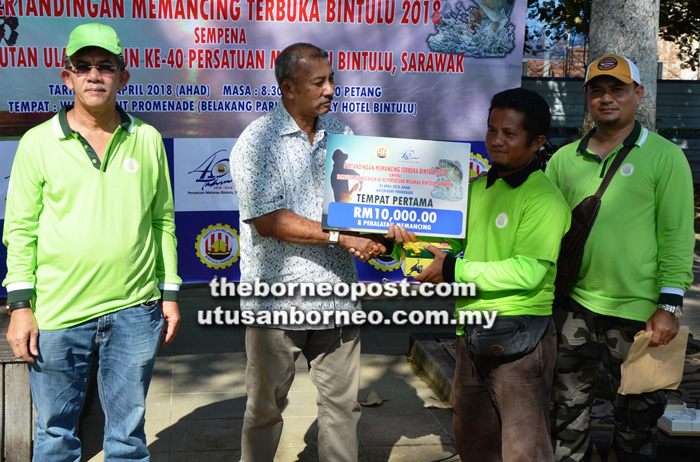 Daud receives his prizes from Azman (second left) as Shamsuddin (left) and other committee members look on.