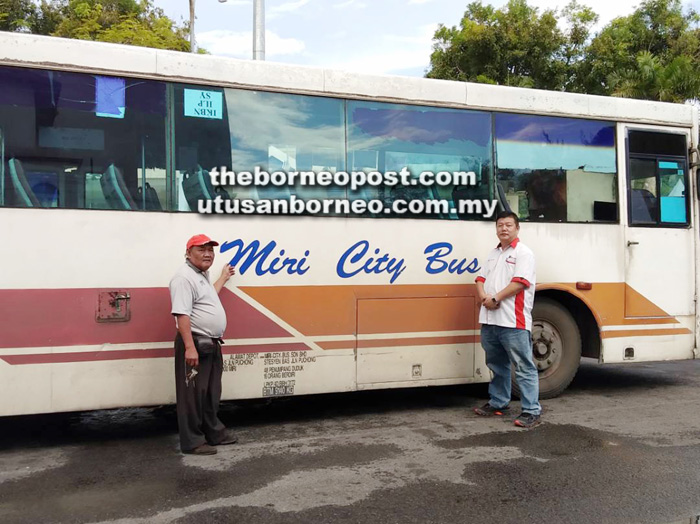 Kiew (right) and his employee pose beside one of their buses.

Its manager Kiew Toh Hee said the move was to offer more convenience to those (living along the routes) without their own mode of transportation.

“By reviving the routes, we are covering areas from Krokop to northern Piasau including areas from Piasau Garden to Jalan Jee Foh and to the city centre,” he said.

Kiew said the air-conditioned buses would start the daily service at 7am, followed by another one at 10am, 1pm and 4.30pm.

“We have received a lot of request from the residents. They have been inconvenienced since we stopped the services four years ago. Those without their own transportation suffered the most.”

He urged the people to make good use of the bus services, but ironically on their first day yesterday (May 2) they recorded zero passengers.

“We hope it will improve with time because we are sincerely offering this service to the people who really need it. We hope they will make good use of the service,” he said.

The routes were halted four years ago due to the declining number of passengers.

He also said many people from other areas which the company buses plied before, were asking them to revive the routes.

“With declining passengers it has not been easy for us. We  hope the government can increase the petrol subsidy for public transport companies, to help us through this tough time,” he said.