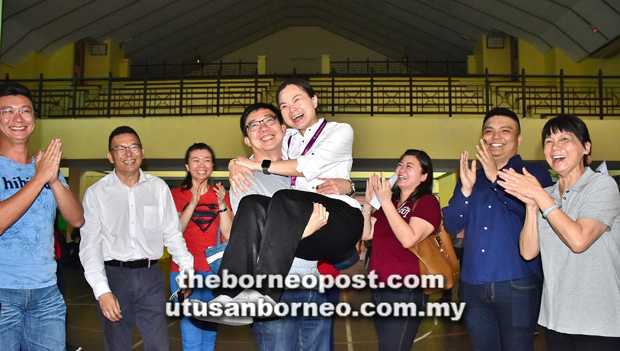 Alice’s husband Loo Chee Wee carries her to celebrate her victory in retaining the Lanang seat.

SIBU: Lanang incumbent Alice Lau Kiong Yien of DAP has succeeded in retaining the seat with a bigger majority than that achieved in the last election.

When interviewed, Lau attributed her victory to the people’s decision to vote for a change.

“They are not voting for me or for the DAP but a change of government,” she added.

Lau said it was a clear-cut case that the election was a battle between the rakyat and a corrupt government.

Despite a lower turnout as compared to the last election, Lau said her ability to retain the seat with an even bigger majority was indication that the people were voting for change.

“Even I myself am surprised with the big majority and for that, I am extremely grateful to all my supporters who had to fly all the way back here to take part in the election,” she enthused.

Kong, on the other hand, said he respected the results as the decision of the voters.

“This is the whole nation’s issue. The stability of the nation is important. We must all unite in the spirit of democracy,” he said.