Wednesday, June 16
You are at:Home»World»19 dead in rebel attack in Myanmar 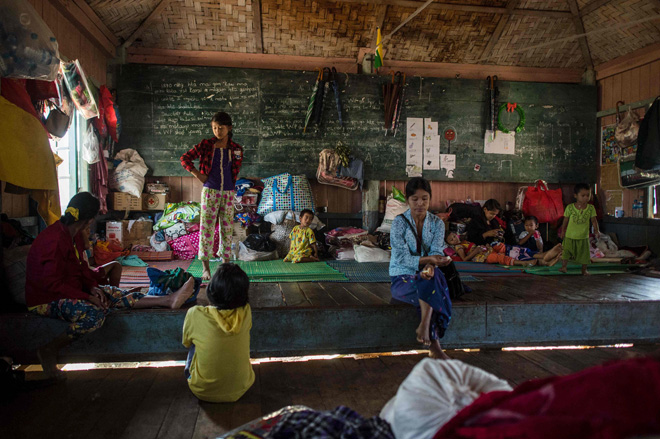 YANGON: At least 19 people were killed yesterday in northern Myanmar when ethnic rebels attacked security force posts in restive Shan State, army and government sources said, the most deadly flare-up in recent years as fighting in the borderlands intensifies.

Rights defenders say clashes in the north near the China border have ramped up since January as the international community focuses on the Rohingya crisis in the west of the country.The military stands accused of carrying out an ethnic cleansing campaign against the stateless minority in Rakhine.

Yesterday’s operation was launched by the Ta’ang National Liberation Army, or TNLA, one of several insurgent groups fighting for more autonomy in the north.

Images and video from the skirmishes shared on social media showed armed men fanning out across a residential street while a rebel soldier took cover behind a car. The sound of automatic gunfire filled the air as ambulances picked up the wounded.

“Nineteen (people) were killed in fighting,” the Myanmar military source said, adding that two dozen had been wounded.

Government spokesman Zaw Htay said in a Facebook post that one police officer and three state-backed militia members had been killed while 15 of the dead were innocent civilians. He called the operation terrorism.

“The attack to target innocent people is not asking for ethnic rights. It is just a destructive terrorist attack,” he said.

A statement posted on the page of Myanmar’s commander-in-chief said military columns were in pursuit of the ‘terrorist insurgents’.

TNLA spokesman Major Mai Aik Kyaw told AFP that they attacked joint military and militia posts in the Shan State town of Muse and on a road to Lashio.

“We fight because of heavy fighting in our region and the serious offensive in Kachin State,” he said, referring to fresh confrontations in Myanmar’s northernmost state between the military and the TNLA-aligned Kachin Independence Army.

It is unclear if members of the powerful Kachin Independence Army, or KIA, took part in the attacks yesterday though the commander-in-chief’s post said they did.

More than 100,000 displaced people now reside in camps in Kachin and Shan states since a ceasefire between the KIA the military broke down in 2011, according to the latest UN statistics.

Those fleeing violence have sheltered in tents and even churches in Kachin, which is mainly Christian, as rights groups and rebels accuse the military of blocking aid.

Myanmar’s patchwork of ethnic groups make up round a third of the population, but the Bamar, or Burmese, have filled the Buddhist-majority country’s power structures since independence in 1948.

Civilian leader Aung San Suu Kyi said ending Myanmar’s long history of clashes was her main priority after she took power in 2016, but she shares power with the military that fought the insurgencies for decades.

More than a third of Myanmar’s townships are affected by unresolved conflict, according to a 2017 report from the Asia Foundation.

Suu Kyi managed to bring two ethnic groups into a ceasefire accord in February, adding to eight others who had signed the deal before she took office.

“She should stand firm with the people but she compromised with the military. She ignored the ethnic issue,” he said. — AFP