Sunday, January 29
You are at:Home»News»Sarawak»‘Digital literacy the right of all Sarawakians’
For the freshest news, join The Borneo Post's Telegram Channel and The Borneo Post on Newswav. 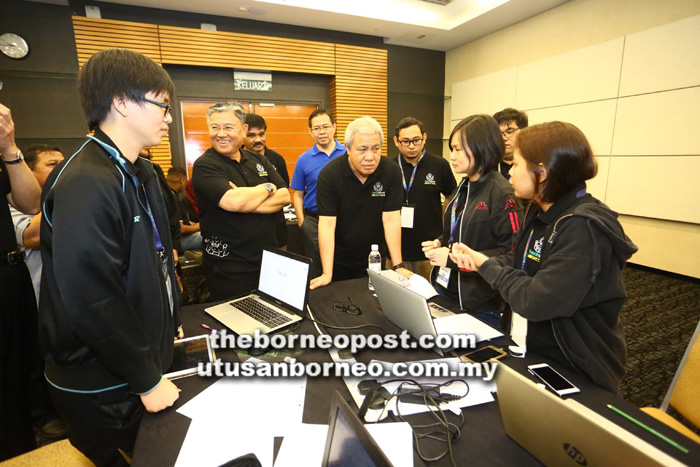 Awang Tengah (front, third right) is briefed by team members participating in the ‘hackathon’. On his right is Morshidi. – Photo by Muhammad Rais Sanusi

As such, he points  out that digital infrastructure development will go hand-in-hand with delivering the right digital skills-learning programmes across the state.

“Training the ‘rakyat’ (people) in digital skills will be a priority. Soon, we will have more programmes such as ‘hackathon’ (a continuous event where teams collaborate to use computer programming to solve problems) all across the state,” he said when officiating at the International Digital Economy Conference Sarawak (Idecs) HackWeekend in Borneo Convention Centre Kuching (BCCK) here yesterday.

On Idecs HackWeekend, Awang Tengah said the goal of the event was to cultivate the culture of problem solving by using digital solutions, whether it is to build computer applications or to build hardware prototypes.

“It is this culture that we want to focus on, and that we hope would grow amongst the people of Sarawak because in line with the state’s digital economy agenda, we want to be able to produce technology solutions and ideas to support the key action of the digital economy plan,” he explained.

The Industrial and Entrepreneur Development Minister also pointed out that 12 teams would be participating in the ‘hackathon’ at Idecs HackWeekend where they would be working to solve problems from three important themes from the state’s digital economy, namely agriculture, tourism and smart cities.

“This ‘hackathon’ will run continuously from today (yesterday) until Tuesday after which they will be presenting a workable prototype for the state government to adopt.

“Should the prototypes of the tops teams meet the required criteria, we plan to adopt, develop further and of course pilot them,” he remarked.