Case not a concocted story but a genuine case, says Shukri Abdull 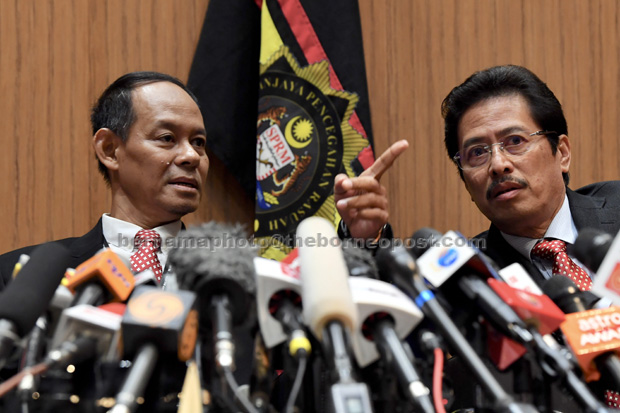 PUTRAJAYA: The 1Malaysia Development Berhad (1MDB) case is not a concocted story but a genuine case that he had been handling, said Datuk Seri Mohd Shukri Abdull who has been brought back from retirement to helm the Malaysian Anti-Corruption Commission (MACC).

Mohd Shukri, who retired as the deputy chief commissioner of the MACC two years ago, broke down as he related how he almost died and went through a harrowing experience when handling the case together with the then MACC chief commissioner Tan Sri Abu Kassim Mohamed.

Mohd Shukri said that while handling the case, he was threatened to be fired, to go on early retirement, to be transferred to another unit, namely the training department, and had bullets sent to his home.

“Abu Kassim and I began the investigation into the SRC International case in July 2015. He asked me to open a file and investigate the accounts of former Prime Minister Datuk Seri Najib Tun Razak in relation to RM42 million.

“We received considerable pressAAure when investigating the case. Our witnesses were taken away by other authorities and questioned what information they had given to the MACC,” he said at a special press conference at the MACC headquarters here.

Just when the investigation into 1MDB reached the final phase, Mohd Shukri said he had a meeting with the former Attorney-General Tan Sri Abdul Gani Patail at his office one day before the latter was sacked.

“We met and discussed the case and Abdul Gani asked me, ‘are you ready to be executed?’”

Mohd Shukri said when he learned that Abdul Gani was sacked the following day, he also received a tip-off that he himself would be arrested on the charge of conspiring to topple the government.

On May 31, 2015, after announcing that he would leave for Saudi Arabia, Mohd Shukri headed to Washington instead in a bid to seek protection.

“I diverted (their attention) and announced that I was leaving for Saudi Arabia, prompting the authority to issue a red alert for me in Jeddah and say that I would be arrested there.

“In Washington, there was a (police) man following me, but my team managed to take his pictures and sent it to me, which I forwarded to former Inspector-General of Police Tan Sri Khalid Abu Bakar and told him to find a better man to follow me. I was not the one being followed, he was,” he said.

Mohd Shukri said in this regard, he did not lodge any police report and despite being threatened and followed, he only made it known to MACC deputy chief commissioner Datuk Seri Azam Baki.

In New York, he went to see his friend at the New York Police Department (NYDP) to seek protection and three bodyguards were provided for him.

“Not long after that, I received information that my staff had been arrested and some MACC senior officers were transferred to the Prime Minister’s Department. I felt so bad for them, I cried thinking about their fate,” he said.

Mohd Shukri said he and Abu Kassim had fought for the country and had tried to get back the people’s money, but both of them were accused of being traitors instead.

He said he immediately sent a WhatsApp message to the then Minister in the Prime Minister’s Department Datuk Seri Shahidan Kassim and also to Datuk Paul Low Seng Kuan, demanding them to return his officers to the MACC.

Then, Mohd Shukri said he and Abu Kasim went to see several ministers to convince them that the two cases were real.

He said although Shahidan gave assurance that the staff and officers would be released and returned to the MACC, he found it hard to believe the minister.

“Shahidan replied to my message saying: ‘Brother, don’t do anything, let me settle it, I promise I will send your officers (back)’,” he said.

Mohd Shukri said he replied: “I don’t believe your promise, a politician promise, I want you to do it immediately, or else I will return and use my power to arrest those who issued the transfer letters for the officers.”

He said as soon as he returned to Malaysia, he convened a meeting with Chief Secretary to the Government Tan Sri Dr Ali Hamsa who agreed to undo the transfer of his officers.

Mohd Shukri said he and Abu Kassim would not stop at nothing in exposing the cases despite being deluged with threats and that they had separately met with several ministers to convince them that the cases involving RM42 million and the RM2.6 billion were real cases.

“If you love the country, replace Najib with someone else, I said, but only three ministers were brave enough to expose it,” he said.

Mohd Shukri said during his final days at the MACC in 2016, he heard a rumour about the appointment of (former MACC chief commissioner) Tan Sri Dzulkifli Ahmad to helm the MACC.

At that time, he said Abu Kassim did not have a choice and had to step down and even the proposal for his deputy Datuk Seri Mustafar Ali to take his place was also rejected.

Mohd Shukri said Dzulkifli, after being appointed to helm the MACC, should have looked more into the 1MDB case to make it stronger (for prosecution), rather than protecting the offenders.

“This is a major betrayal and I will not work with traitors. So I applied for early retirement and took an Arabic course as an excuse to leave the MACC,” he said.

Meantime, Mohd Shukri claimed that there was a Member of Parliament (MP) from a northern state who had been interrupting the 1MDB investigation and had even tried to negotiate in relation to the case.

He said the MP once asked: “What do you want?”, to which he replied: “I just want one thing, don’t interfere in my investigation (of 1MDB), let me finish, then the A-G (Attorney-General) will decide (on this matter). If you come (and interrupt the 1MDB probe) again, I will arrest you.” — Bernama