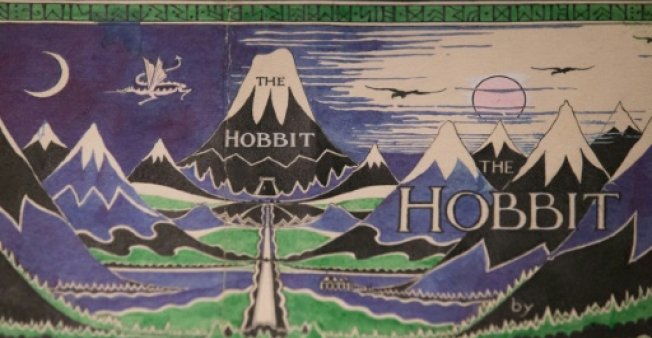 The final cover art on the first edition dust jacket of J. R. R. Tolkien’s ‘The Hobbit’ can be seen at the exhibition. AFP photo

OXFORD: The University of Oxford was set to unveil Friday a “once-in-a-generation” exhibition of materials related to “The Lord of the Rings” author J. R. R. Tolkien, featuring previously unseen objects from several countries.

“Tolkien: Maker of Middle-earth”, which opened in its Bodleian Libraries, presents manuscripts, artworks, maps, letters and artefacts in the biggest display in decades on the beloved British author — whose works gave rise to the hugely successful film series.

Some of the exhibits are returning to Oxford — where Tolkien spent most of his adult life — for the first time since his death in the historic English city in 1973.

“What we wanted to show was Tolkien’s original work, stripping back interpretations to where it all started,” curator Catherine McIlwaine, Tolkien archivist at the libraries, told AFP.

The displays showcase the range of John Ronald Reuel Tolkien’s output, from early abstract paintings and tales he wrote for his children, to material related to works published posthumously.

“Tolkien has always been a global phenomenon… even when he was alive,” said Richard Ovenden, who heads the libraries.

“And we’re really the only institution that can do this, having far and away the largest collections of Tolkien materials.”

Bodleian — the university’s main research library — has presented much of this extensive archive, alongside interactive elements such as a three-dimensional map of his imagined “middle-earth”.

But among the centrepieces of the exhibition are some loans: rare draft manuscripts and exquisite illustrations for “The Hobbit” — Tolkien’s breakthrough published in 1937 — and his 1954 follow-up “The Lord of the Rings”.

The displays, which also include his own stunning draft book jacket designs for the works, were borrowed from Marquette University, a Catholic institution in the US state of Wisconsin.

It acquired them from Tolkien in the late 1950s.

“To bring those back to Oxford for the first time in 60 years (we knew) was just going to be extraordinary,” added.

“We thought that’s going to make it a really special exhibition that hasn’t been done before.”

She estimates at least a third of the 200 items in the exhibition, which took her five years to organise, have never been seen publicly before.

Personal aspects of his life are evoked, including childhood and student days, his career as a scholar of literature, and his family life.

The displays include numerous items loaned by his third son Christopher Tolkien, notably the writing desk and chair from the home office where the author created his fantastical worlds.

Memorable fan mail from over the years is also on show, such as a letter from a then 19-year-old Terry Pratchett, the English author of fantasy novels, which began: “this is simply a letter of appreciation”.

Among the materials from Marquette University are early plot notes for “The Hobbit” showing how Tolkien changed the names of some key characters, such as the famous wizard Gandalf, who was originally called Bladorthin.

Born in South Africa, he was raised in and around Birmingham but arrived in Oxford as an undergraduate at Exeter College.

He returned as a professor of English language and literature at Merton College, becoming friends with other rising literary figures there, including C. S. Lewis.

The university professor with a consuming passion for rare, historical languages and a vivid imagination, is also buried in Wolvercote Cemetery in a northern suburb.

Legions of fans flock there to lay flowers at his grave.

“I think Oxford really did help to provide the framework in which he was able to flourish as a literary genius,” said Ovenden.

The exhibition runs until October 28 and hopes to attract 100,000 visitors.

Bodleian will then collaborate with the Morgan Library and Museum in the United States, and the National Library of France, which are both planning on similar Tolkien exhibitions in 2019.

“The popularity of Tolkien just doesn’t seem to wane,” said McIlwaine, as she prepared to welcome Tolkien family members to cut the ribbon on the Oxford exhibition. – AFP