Wednesday, July 6
You are at:Home»News»Sarawak»Masing suggests Sarawak’s reserves of RM31 billion be used before the next state election 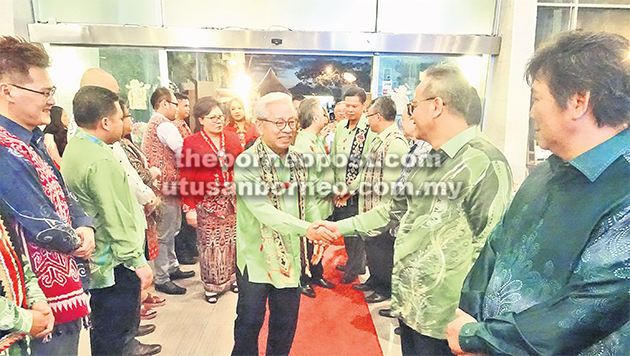 Masing being greeted by PRS vice-president Datuk Liwan Lagang upon his arrival at the dinner venue on Sunday.

KUCHING : Deputy Chief Minister Tan Sri Datuk Amar Dr James Masing has assured that the Sarawak government has RM31 billion in its reserves to be spent on development projects throughout Sarawak over the next three years.

“When they (the new government) use the money for development they will look good in the eyes of Sarawakians but the fact is that the money does not belong to them and we worked hard to earn that money which is being kept in the reserves. We must use the money now to develop Sarawak,” he emphasised.

He also said the money could help to win the hearts of Sarawakians as it would be used to develop Sarawak which would then deprive the opposition of any issues to criticise the state government as GPS had done its best for the people of Sarawak.

This would ultimately determine that GPS continue to stay in power after the election, he reasoned.

“I am sure that Sarawakians will also recognise that the government cares and knows what is right for its people.

“This is the time we show Sarawakians that we do care about Sarawak’s future and we want to serve Sarawakians in the best possible way we can,” he said.

He also said the government should use the reserves to construct rural and coastal roads.

“There are a lot of infrastructure which need to be built in the state, especially along the state’s 900km stretch of coastal road which starts from Sematan to Miri. The road needs at least five bridges to be built along it,” he said.

He also mentioned the need to build another road from Kota Samarahan to Roban and onward to Sibu and another one from Sebuyau to Betong.

Besides using the reserves to build roads, he suggested that the money could also be used for many other things such as improving electricity coverage, improving water supply and upgrading many other infrastructure for the people of Sarawak.

Masing was speaking at a dinner held at a local restaurant on Sunday in which he was guest of honour.

Previous ArticleSingle party not the answer
Next Article Americans own 40 percent of world’s firearms: study