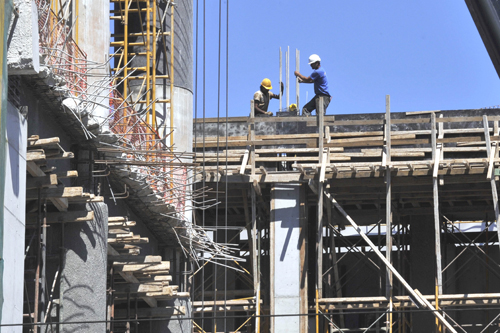 Slow orderbook replenishment is expected for the local contractors for at least the next 12 months. — AFP photo

KUCHING: Slow orderbook replenishment is expected for the local contractors for at least the next 12 months, analysts say in a construction sector update.

“We estimate the potential large-scale infrastructure projects to be implemented from 2019 onwards following the review will be reduced to RM108 billion from RM222 billion previously,” it said.

“The major change is the exclusion of the Klang Valley MRT Line 3 (MRT3) and high speed rail (HSR) projects from the list as they have been postponed or cancelled by the government.”

The research firm noted that this has led to volatility in the share prices of the construction stocks.

“Prime Minister Tun Dr Mahathir Mohammad said that the Kuala Lumpur-Singapore HSR project has been postponed, and not scrapped as stated previously, leading to a relief rally for impacted firms.”

AffinHwang Capital opined that these developments indicate that the infrastructure spending cuts may not be as severe as initially portrayed in statements made by the new government previously.

The research firm believed part of the reason is due to costly cancellation clauses in government-to-government contracts signed for the East Coast Rail Link (ECRL) and HSR.

The research firm added that the cancellation risk for HSS’ ECRL contracts, worth about RM130 million and 19 per cent of its order book of RM673 million, is also reduced.

On another note, Affin Hwang revealed that there was good investor interest in its recent macroeconomics/construction sector outlook analyst marketing.

“In general, most investors were concerned about the short-term pain of cleaning up the administration, the risk of the government’s populist measures raising the federal government deficit, and revelations of higher-than-expected federal government contingent liabilities and lease obligations.

“There were also concerns on the cancellation of infrastructure projects and the adverse impact on the construction sector and the companies affected.”

“However, some were looking for potential investment opportunities in ‘bombed-out’ construction stocks such as Gamuda, IJM and WCT.”

AffinHwang Capital noted that most of them acknowledge the good long-term prospects of the new government’s efforts to eradicate corruption, improve transparency in the award of future government contracts and reduce its operating expenditure.

“Efficient contractors that are competitive in open tenders for projects will benefit under the new regime.”