Saturday, October 8
You are at:Home»News»Sabah»Mosque too beautiful, say dancing tourists 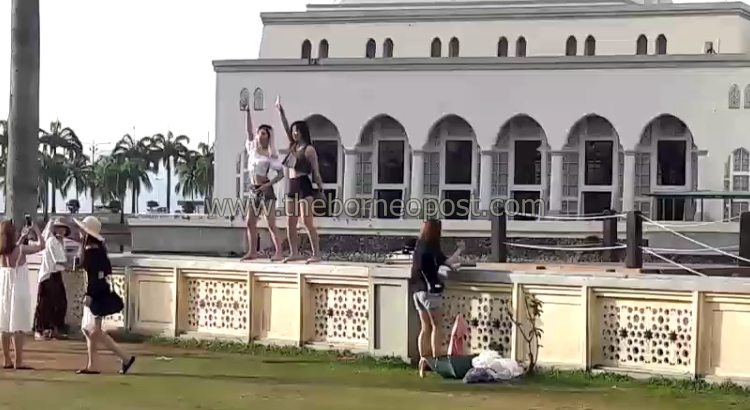 Tourists dancing on top of the fence of the Kota Kinabalu City Mosque went viral recently.

KOTA KINABALU: The two young Chinese tourists decided to dance on top of the fence of the Kota Kinabalu City Mosque recently despite being reminded that it is a holy ground by a tour guide, said a reliable source.

According to the source, only 10 out of 40 tourists that came in a tour bus decided to enter the city mosque.

The source said when the tour guide returned to the bus after leading the 10 tourists into the mosque area, the two scantily dressed female tourists were already in the middle of their synchronized dance.

“They are all still young, in their 20s. The guide asked them why they were dancing like that even though they had already been told that the place was a holy ground,” the source told the Borneo Post here yesterday.

“They apologized and said that they were not aware. They gave the excuse that the mosque was too beautiful and they wanted to do a dance video clip using the mosque as the background,” said the source.

According to the source further, the dancing tourists came to Sabah in group of 200 people from China.

On May 24, the Kota Kinabalu City Mosque management committee decided the the holy ground was temporary off limits to tour activities as a result of the viral 10-second video clip of the synchronized dancing tourists.

All express buses, Grab cars and taxis were also banned from entering the mosque compound and parking outside.
According to the management, an average of 1,000 tourists visit the popular tourist spot daily.