Tuesday, December 7
You are at:Home»News»Nation»Ex PM Najib appears in court on graft charges 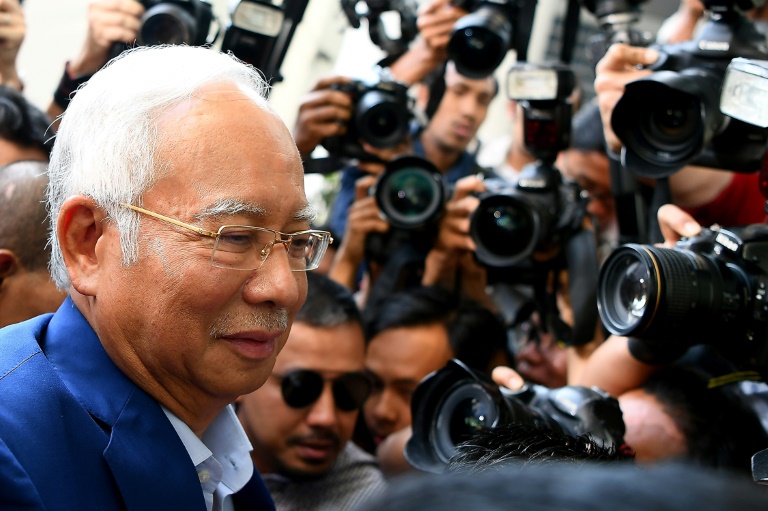 Najib is set to be charged Wednesday after he was arrested by anti-corruption investigators. AFP photo

A scrum of journalists greeted Najib, 64, as he became the first ex-premier in Malaysia to appear in front of a judge.

A tired-looking Najib was escorted by around 20 police officers into a courtroom where security was tight, less than a day after he was arrested at his luxury home by officers probing how billions of dollars of state funds disappeared on his watch.

The arrest is the latest in a series of stunning moves by investigators that suggest the legal noose is tightening around Najib, his family and many of his close political and business allies.

Malaysia’s state news agency Bernama said the former premier is expected to face more than 10 counts of committing criminal breach of trust linked to SRC International Sdn Bhd, an energy company that was originally a subsidiary of 1MDB, which Najib founded.

“Najib is the first (former) prime minister ever to be charged in court in the history of Malaysia,” said Tian Chua, vice president of Parti Keadilan Rakyat, a key political party in the current ruling coalition.

“It signals a new era where no one in public office will be immune from punitive action if they abuse power,” he added.

According to an investigation by the Wall Street Journal, $10.6 million originating from SRC was transferred to Najib’s personal bank accounts, a fraction of hundreds of millions of dollars from 1MDB that was allegedly funnelled to him.

Lawyers familiar with corruption cases told AFP they expect the charges to be read to Najib and a plea would be taken. His lawyers are expected to apply for bail. – AFP