Thursday, July 7
You are at:Home»News»Nation»Najib charged with CBT, abuse of power 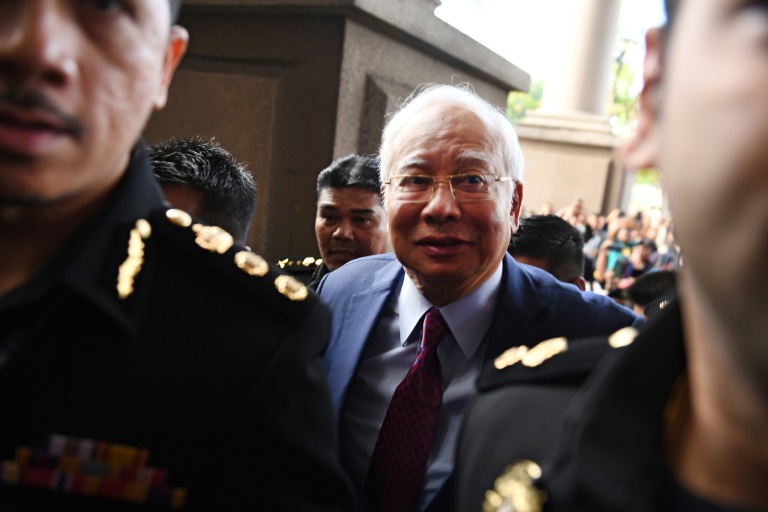 However, no plea was recorded from Najib after all four charges were read out to him before judge Datuk Zainal Abidin Kamarudin.

On the first charge, Najib was accused that as a public servant and agent, namely Prime Minister and and Finance Minister of Malaysia,  Advisor Emeritus SRC International Sdn Bhd (SRC) and in those capacities entrusted with control of funds belonging to SRC totalling RM4 billion, had committed CBT involving a sum of RM27 million.

He was accused of committing the offence at AmIslamic Bank Berhad,  Ambank Group Building , No 55, Jalan Raja Chulan, here between Dec 24,  2014 and Dec 29, 2014 and charged under Section 409 of the Penal Code which provides for jail up to 20 years and whipping and also can be fined, if convicted.

On the second count, Najib was charged that as Prime Minister and Finance Minister with control over  SRC funds totalling RM4 billion, had committed CBT involving RM5 million at the same place and during the same time frame.

On the third count, Najib was charged with being Prime Minister and Finance Minister entrusted with  SRC-owned funds of  RM4 billion, committed CBT involving RM10 million at the same place between Feb 10, 2015 and March 2, 2015, according to the same section  (of the Penal Code).

On the fourth count, Najib was charged with being a public official namely Prime Minister and Minister of Finance of Malaysia, using his position to to commit bribery involving RM42 million when he participated or was involved in a decision on behalf of the Malaysian government, to provide government guarantees for loans from the Retirement Fund Incorporated Fund to SRC International Sdn Bhd amounting to RM4 billion.

He is accused of committing the bribery at the Prime Minister’s Office, Prescinct 1, Putrajaya, Federal Territory of Putrajaya, between  Aug 17,  2011 and Feb 8, 2012.

The charge framed under Section 23 of the Malaysian Anti-Corruption Commission Act 2009 punishable under Section 24 of the same Act, provides for a jail term of up to 20 years and a fine not less than five times the amount or value of the bribe or RM10,000 whichever is higher, if convicted.

Najib nodded that he understood all the charges. The case was transferred to the High Court.

Among the six former prime ministers of Malaysia, Najib is the first to face criminal charges.

Najib was arrested at his residence in Jalan Langgak Duta here at 2.35 pm Tuesday by the Malaysian Anti-Corruption Commission (MACC) over its investigation into SRC International.

The former premier had gone to the MACC headquarters twice earlier to have his statements recorded over investigations into a case related to SRC International.

SRC International was a subsidiary of 1MDB until it was placed under the jurisdiction of the Finance Ministry in 2012. – Bernama