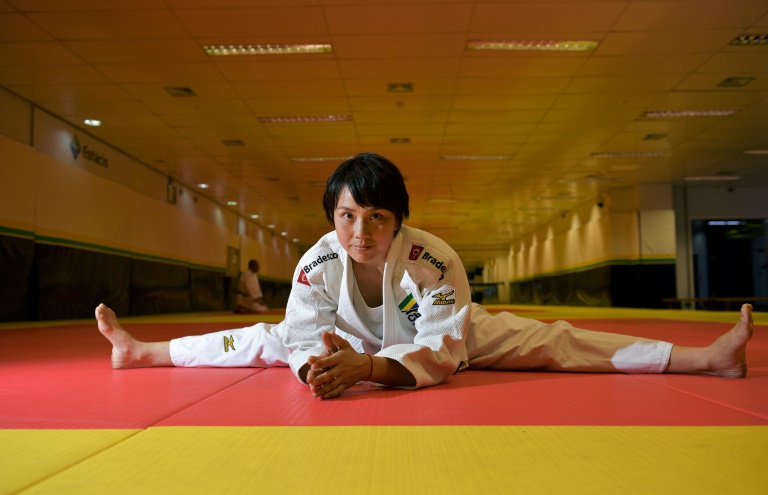 Japanese black belt Yuko Fujii, head coach of the Brazilian men’s national team, warms up before a class in Rio de Janeiro on June 26, 2018: she made history as one of the very few women in the world to head any top-level male sports team, let alone judo. – AFP file photo

Judo is about throwing adversaries to the mat, but in becoming the first female head coach of the Brazilian men’s national team, Yuko Fujii has taken down one of the biggest obstacles of all in the world of sports.

On being named to the position at the end of May, the soft-spoken, 35-year-old black belt made history — and not just in Brazil.

Fujii, who is from Japan and was previously an assistant coach with the squad, is now one of the very few women in the world to head any top-level male sports team, let alone judo.

In judo powerhouses such as France, Japan and Russia, men coach not only the male but the female athletes, and certainly in Fujii’s homeland the idea of a woman taking over the men would be pretty much unimaginable.

“Japan is more traditional and macho than Brazil. The men’s team doesn’t have a single woman — well just one, the nutritionist,” Fujii told AFP at Brazil’s national training center in Rio de Janeiro.

For example, Brazil briefly had a woman, Emily Lima, coach its female football team but she was fired in 2017 and replaced by a man. The same thing happened in 2015 when Spain sacked its first ever female Davis Cup captain, Gala Leon.

Brazil’s new judo coach, though, is receiving a warm welcome.

“Sensei Yuko has made quite a difference. With her as our sensei, our technical level has already improved,” said Ruan Isquierdo, a giant heavyweight member of the Brazilian team, calling his coach by the Japanese honorific roughly meaning “teacher.”

At 309 pounds (140 kg), Isquierdo literally towers over the diminutive Fujii, but for all his strength he says he’d take nothing for granted in a judo bout with his sensei.

“If I were too slow, she’d throw me, for sure,” he laughed. “She has very high skill levels.”

To Fujii, the gender wars are an abstract issue compared to the immediate goal of winning battles on the judo mat, or tatame.

“I don’t think, ‘I’m a woman and the others are men.’ I never thought about this. My focus is always: can I use my strengths to help the team?” she said.

This attitude helps explain her surprise selection by the Brazilian Judo Confederation, which had reportedly been looking at an all-Brazilian shortlist, headed by former Olympic medalist Tiago Camilo, to replace the outgoing coach.

With the 2020 Tokyo Olympics looming and a disappointing men’s performance at the 2016 Rio Games fresh in their memory, Brazil’s judo authorities wanted a change in direction.

The solution, it turned out, was hiding in plain sight.

Fujii had been recruited by Brazil in 2013 after having helped coach Britain’s team at the 2012 London Olympics, where Gemma Gibbons won silver and Karina Bryant got bronze.

In Rio, Fujii assisted coaching of both sexes and spent a lot of time with younger athletes, building deep knowledge of the national judo landscape. When Rafaela Silva, who trained especially closely with Fujii, won gold at the Rio Olympics, Fujii’s star rose ever higher.

Silva credits Fujii with helping steer her back from a harrowing disqualification in London 2012, followed by racist abuse at home, and a depression. Now Silva, who has become one of Brazil’s best known athletes, thinks the men can benefit from the same touch.

“It will help the men’s team at a time when it isn’t doing very well,” Silva said, watching Fujii run a class for half a dozen promising youngsters.

“People hope that since she worked with the women’s team she can bring the same to the men’s team. I think it will make a difference — and the guys will be able to learn a bit from the women.”

Fujii is still among the exceptions that prove the rule about under-representation of women in coaching.

In the United States, Rebecca Lynn Hammon won fame when she was hired by the San Antonio Spurs basketball team, becoming the first full-time female assistant coach in the NBA. Hammon is now reportedly in the mix for a first head coach job.

But with even US college female athletes being routinely coached by men, Hammon cuts a lonely path.

It’s the same in tennis.

France’s Amelie Mauresmo broke new ground by coaching Andy Murray and she has just been named to take over the French Davis Cup team. But the biggest stars in the women’s game, Venus and Serena Williams, use male coaches.

Fujii says the situation is improving in judo, both within the International Judo Federation and on the mat, with more female coaches and athletes getting higher profiles.

But when asked if she sees herself as pioneer, she chuckled. She knows that in the end she’ll be judged on Brazil’s performance at the 2020 Tokyo Olympics.

Her main goal: “For our athletes to do good judo and give everything,” she said.